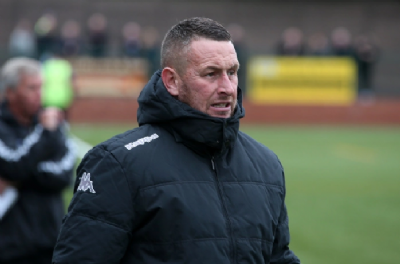 Matlock Town boss Paul Phillips is calling for the season to end now after it was finally postponed over the coronavirus outbreak on Monday.

The Gladiators should have played on Saturday with the rest of the BetVictor Northern Premier League but their home game with Nantwich Town was postponed after Phillips and several players and members of staff felt unwell on Friday.

Ashton United were due at the Proctor Cars Stadium on Tuesday night and Phillips, pictured, believes the time has come to consign the season to history.

“When are we going to play, the world’s at a standstill, football has to take a back seat with people dying,” insisted the Gladiators boss.

“There’s all sorts of implications for clubs, players contracts being one of them and everything from top to bottom has to be handled by the league and the game in general in the right way.

“Nobody could have foreseen what was going to happen, the health of everybody’s families must come first.”

The Gladiators are currently third from bottom with play suspended and Phillips is well aware his controversial call would see his side to safety were the season to end.

“I don’t think you can really put anyone down and there’ll be implications and grievances if teams at the top don’t go up so it’s a really tough one,” added Phillips in a statement on the NPL Premier Division club’s website.

“The season should really end now when you look at all that’s involved, but what’s important more than anything else is for all of our clubs to rally round each other to get what’s best in what will be financially and mentally awkward times. If we do start playing again, the big question is when and when will next season start?”