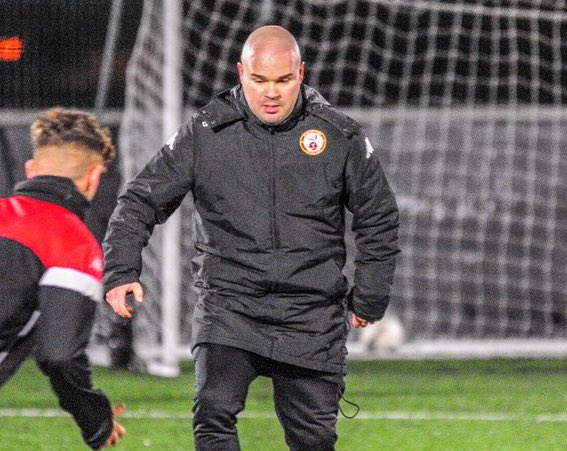 Radcliffe FC boss Lee Fowler has saluted the BetVictor Northern Premier League club’s fans for their fantastic support before the season was cut shot by the coronavirus crisis.

A bumper gate of 1,228 come came through the turnstiles to see Fowler’s side take on FC United of Manchester, as well as crowds of over 500 when they welcomed Atherton Collieries on Boxing Day and the Red Rebels back in the Buildbase FA Trophy.

Fowler, pictured, told  supporters: “Everyone has put so much time and effort into this season both emotionally and financially, we appreciate the support with the attendances raising up to 59 per cent, we salute you and hope you can carry the support and growth next season!”

The former Coventry man hadn’t won a game since taking over back in February but he isn’t shying away from next season’s challenge, declaring: “Myself and my staff have been planning and preparing, ready for next season. There will be faces leaving and new ones into the club. The season in my opinion has been not great and too much change led to results on the pitch.

“I thank you for the welcome into the club since I’ve been here. In the two home games I hope you seen a team you can feel proud of and also able to relate with hard working, passionate, committed entertaining football.”

Fowler also wanted a to deliver a positive message among all the negative football headlines at the top levels of the pro game and fears of clubs going bust below.

He added: “Well that’s the end of a bizarre season which has seen three managers, matches off due to weather and a virus which sees the season that come to an abrupt end. People’s lives and health are paramount and come above promotions and relegations and the futures of non-league clubs and their existence.

“First and foremost, I want to wish everyone to stay safe and healthy and look after the people you love and care for. If we can do this and then extended this to see if we can help anyone else in need even a phone call, a chat, a smile and be positive goes a long way.”

So that’s the end of 2019/20. Thank you to everyone involved. The Players, Management, our staff and the supporters who gave their all over the season covering many miles over the campaign. See you again for another season whenever that may be. ? #weareradcliffe #UTB pic.twitter.com/Y0hyM3PZ5q

The seasons of all leagues at Steps 3 to 7 were terminated by the Football Association nearly two weeks ago. The decision has sparked huge controversy after the campaign was declared null and void with no promotion or relegation below Step 2.

As reported in The Non-League Paper on Sunday, more than 180 clubs had signed a petition by the weekend calling on the governing body to reconsider how season 2019/20 is concluded ahead of a meeting of the FA Council yesterday (Tuesday).

The National League, originally suspended until 3 April, have opted to extend the 2019/20 season “indefinitely”.

Make sure you get your copy of The Non-League Paper from this weekend for great features and all the latest news in one place on the impact of the coronavirus crisis on society and football.