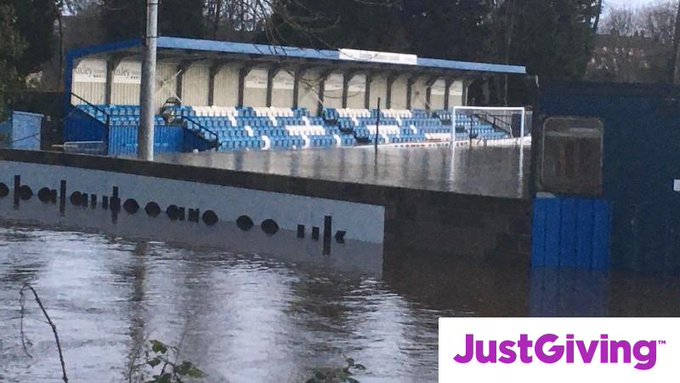 February’s Storms Ciara and Dennis left the NPL North West Division’s Brewers with an estimated repair bill of up to £40,000 at the i2i Stadium.

The clubhouse, pitch, fencing and other facilities were all devastated after being left under a 1.5 metres deluge of water during a series of floods, pictured.

Officials – who worked with the Football Foundation and the West Riding County FA to secure a £24,982 grant – celebrated a £5,000 donation from Selby District Council only last week.

Before announcing the five figure boost in a statement on Monday, another £7,847 had been raised towards a £12,000 target set by fundraising fans on a JustGiving page.

Tadcaster chairman Andy Charlesworth told the club’s website: “Football is vitally important to the local community here as well as the players and volunteers who help run the club. We have been in existence since 1892 and at the current stadium for 60 years.

“To receive this funding from the Premier League, The FA and the Government through the Football Foundation means a lot to us as it will help us continue to represent the town and get even more people involved in the nation’s favourite game.”

Football Foundation chief executive Paul Thorogood said: “We’re dedicated to improving grassroots football facilities because we want to encourage more people to get involved in our nation’s favourite game, regardless of their background, age or ability.

“That’s why I’m delighted that this funding will support Tadcaster Albion to continue and thrive after the devastating floods earlier this year.”

Officials at Ings Lane know how to secure grant funding. In March 2019, they scooped £25,000 worth of building materials from Buildbase, the sponsors of the FA Vase and FA Trophy.

For more news like this on the impact of the coronavirus crisis on football and society, make sure you get your copy of The Non-League Paper!

In shops on Sundays and Mondays, The NLP is always available as a page rustling digital edition and full replica of the printed paper from midnight on Saturdays too.

So if you missed Sunday’s paper, it’s only a few clicks away right now. Digital readers also save cash on single issues and even more on longer deals!