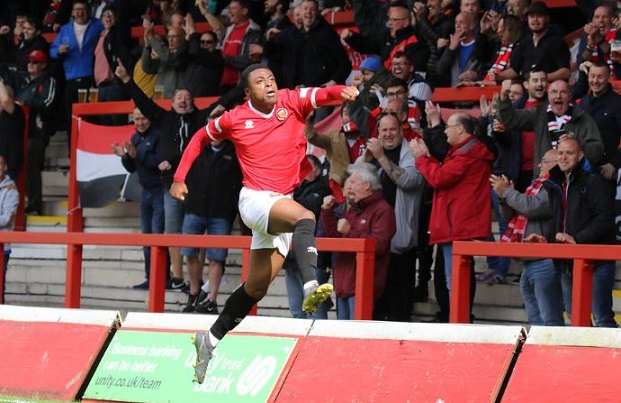 The 24-year-old is heading north of the border for an undisclosed fee after netting 35 times in all competitions before last season was wrecked by the Coronavirus in March.

His exploits in becoming the scorer in the top seven tiers of English football saw him voted FotMob Northern Premier League Player of the Season by The NLP’s readers at the 2019/20 Virtual National Game Awards.

After helping Radcliffe Borough, now Radcliffe FC, win promotion to the NPL’s top flight in 2018/19 as their top scorer, Owolabo kicked off last season in Malta with Victoria Hotspurs. He only joined the Rebels by chance at the end of last August when he bumped into manager Neil Reynolds at Manchester Airport’s arrivals lounge on his way home!

Owolabi, who has thanked FC United’s “incredible” fanbase for inspiring his goal-scoring heroics, is in contention to make his debut against Celtic on Sunday after leaving Broadhurst Park on Wednesday.

He told the Hamilton official website: “I’m overwhelmed, it was always my dream to be a professional football player and I have worked really hard to get here. It hasn’t sunk in yet but I’m just trying to enjoy the experience.

“Non-League is tough, you play against players who are physically strong and I had to get used to that quickly and I think that has prepared me for this level.”

Reynolds, whose side were second and on a great run behind leaders South Shields, paid tribute to the departing striker in a statement on the club’s website.

He said: “I am delighted for Tunde to fulfil his dream to become a professional footballer. The last few days have been a testing time trying to get the deal finalised but as with all deals, they take time. I am happy that it has now been concluded and we can move forward and plan for the upcoming season.

“Tunde was an integral part of what we achieved last season. Since joining the club he was always hardworking and eager to improve and no-one can argue about his goal scoring record during last season. I have thoroughly enjoyed working with Tunde and hope he goes on to reach his goals.”

FC United were second in the NPL Premier Division when the season ended, 12 points adrift of runaway leaders South Shields but riding a wave of ten wins from their previous 16 league games.

A product of the Manchester Football Academy, Owolabi previously played for FC United’s Development Team during the 2013/14 season and has also represented Hyde United and New Mills AFC.

OUT NOW: Sunday’s NLP is always available as a digital paper!