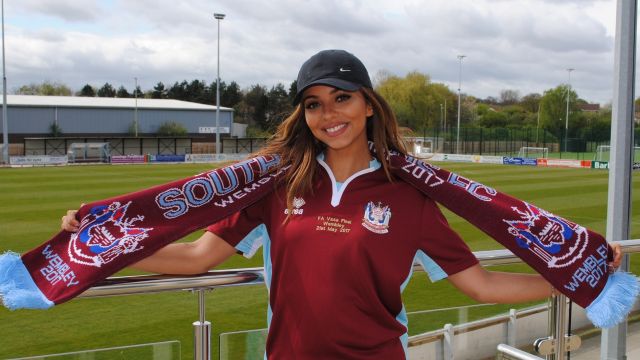 Little Mix superstar Jade Thirlwall is on a mission to see South Shields go global after agreeing to be the honorary president of her hometown club.

The singing ‘Sanddancer’ – who’s recently invested in her own bar and nightclub in the town – is looking forward to acting as the NPL Premier Division club’s advocate, tackling issues including homophobia, sexism and racism.

Pictured at Mariners Park, the star told fans she wanted to get more involved after being impressed by the work of the club’s charitable foundation – which works with more than 900 children every week during school term times and is also promoting girls’ football with dedicated weekly sessions.

We are proud to announce that @LittleMix‘s Jade Thirlwall has accepted the role of Honorary President at South Shields Football Club. pic.twitter.com/1W2f3eGJp1

“I’m so grateful to be asked to be the Honorary President of South Shields Football Club,” said Thirlwall who’s been committed to supporting the community of South Shields and South Tyneside since finding global stardom and was at the club’s final match of last season before the Coronavirus, March’s 5-3 over FC United of Manchester at the 1st Cloud Arena.

“I’m incredibly proud to come from South Shields and one thing I am most proud of about my hometown is the sense of community and how we love to support each other and see each other do well in all aspects of life, which is something the football club very much embodies.

“I hope through my role I can raise awareness and increase the club’s profile, encouraging others to do the same and support our incredible team. I’m looking forward to also being involved with any future projects the club will embark on that coincide with what I am passionate about.”

She added: “I’m really hoping our club can be very progressive in that sense as well as being insanely talented on the pitch. I’m so excited and I hope I can do everyone proud, just as our team has for our hometown.”

South Shields chairman Geoff Thompson said: “We are delighted Jade has agreed to this ambassadorial role with the club. The club, its charitable foundation and its academies are increasingly important in our community, helping to deliver a series of health and well-being programmes for people of all ages.

?? Listen up everyone, the President is speaking! pic.twitter.com/vH5TG4RLgW

“Jade’s commitment to the town mirrors the club’s commitment and we are thrilled she is on board to further promote what we are trying to achieve.”

Since their debut in 2011 winning the eighth series of The X Factor, Little Mix has sold just under 60 million records worldwide, placing them in the top five of the best selling girl groups of all time.