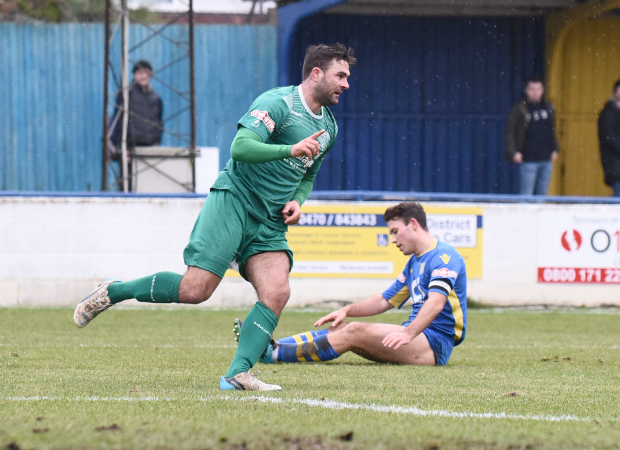 SO, where exactly was Andy Sandell when Chippenham Town won the Southern League Premier title on Good Friday?

“My wife was show jumping in a competition in Wales, so I was down at Chepstow with her. I had the updates on the lads’ group chat for 90 minutes. It would have been nice to have won it on the Saturday in front of the home fans obviously. But it’s winning a title. It doesn’t really matter how or when you win it, as long as you win it.”

A run of 23 games unbeaten had catapulted the Wiltshire club to the top of the table and into the National League South for the first time in their history.

“The lads have been all as one – not just on the pitch, but off it,” Sandell says. “Our group chat has been 24/7 seven days a week for the last six months. It’s been unreal.

“When we got to October time I started thinking to myself, ‘We’ve got something special here’. You’ve got to keep the momentum going. The gaffer made some good signings, which obviously helped us. The lads who have been here before this season stepped up and everyone has produced. It’s not just certain individuals, it’s the squad as a whole and that’s why we’re top.”

A big reason is also the 48 goals scored between Sandell and strike-partner Dave Pratt. Sandell leads the goal charts with 27 goals, while Pratt has 21 of the 92 the team had scored ahead of last weekend.

“We’ve scored our fair share,” Sandell says. “But Will Richards is in double figures, Smudger (Matt Smith) is, Fergie (Alex Ferguson) nearly is. So the lads have all produced. They’ve scored good goals at key times in games where it was tight.

“I just clicked with Pratty. I think it was our first pre-season game. The ball came into me, he ran off me, I laid him in, he scored. We haven’t looked back from there.

“We’re totally different players which massively helps. He’s won me a lot of penalties this year so I’ve got to thank him for that! Then again, I’ve given him just as many in assists.

“It’s basically an old-fashioned combination of a target man and someone a little bit younger, smaller and nippier around him. It just works for the way we play as a team and us two as a partnership.”

While Pratt has banged them in in the Conference South for Basingstoke Town and Maidenhead United, Sandell’s name among the top scorers of a division is a more recent phenomenon. As the man himself says, ‘Not bad for an ageing defender!’

The 33-year-old was better known as a left-back, left wing-back or a left midfielder in a career that saw him win promotion with Bristol Rovers to League One and Newport County from the Conference into the Football League.

“I just got fed up of chasing people,” Sandell says about the conversion that also saw him finish top scorer last season with 22 strikes.

“I’d played up there for Salisbury when we were in the Conference and really enjoyed myself.

“I like the battle and it’s always more rewarding scoring goals than it is clearing one off the line or making a last-ditch tackle. I’ve done that for so many years and I fancied a change.

“I’ve played with and against a lot of rubbish strikers in higher leagues so I thought to myself, ‘It can’t be that bad, I’ll give it a go’.

Part of the appeal of dropping back into Non-League football when he left League Two side Newport County was so Sandell could spend time on other things. 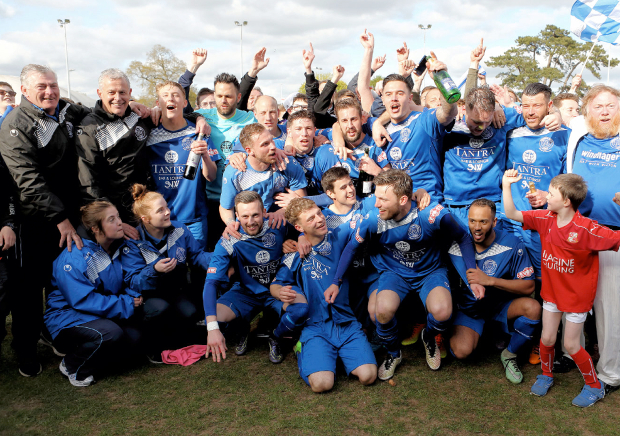 Instead of a move to Hartlepool United he wanted to stay close to home where he runs an equestrian business, Meacham Stud, with wife Claire.

“She does all the practical side and I do all the paperwork! All the fun bits like tax returns and wages,” he says. “It’s mainly showjumping, but she does do a bit of dressage and eventing as well.

“We travel around the country every second or third week of the month for a three or four-day show. We own seven or eight horses between us, but we’ve got 20 stables where we are.”

Every summer he plays cricket for Goatacre, he’s a keen golfer and has even got in the boxing ring. A video on YouTube shows his win in June 2015 against James Rutter.

“I haven’t done it for a year or so because my wife didn’t want me to do it before our wedding,” he says. “But I will definitely get back in the ring. It’s something I really enjoy. I’ve had just one named fight, but when you’ve gone around Wiltshire sparring in all the different clubs, it’s not like a full-on fight. But it’s a bit like a football match. You go to someone else’s place and you want to win.

“I’m very competitive. If I’m doing something I want to do it properly and I want to win. No matter what. It’s like now. I’m just waiting to play FIFA with my son Alife and I will not let him beat me!”

Thankfully, then, he has a league winner’s medal around his neck this season as his decision to muck it out in Non-League pays off.

“I do enjoy playing Non-League football,” he says. “I grew up playing it. After the game you get in the bar and have a few drinks, a game of cards on the coach home – it’s just all very enjoyable.”