Posted on 29th January 2020 by admin in Latest News, Southern Leagues with 0 Comments 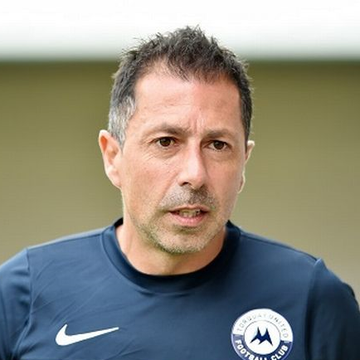 Robbie Herrera has admitted that his start to life as the new first team coach at Dorchester Town has been “tough”.

Appointed at the start of January alongside Leigh Robinson after he succeeded former manager Callum Brooks, Herrera has yet to taste success in the BetVictor Southern League with only one win so far from six games – a 4-1 Dorset Senior Cup semi-final victory over Wimborne Town.

The UEFA A coach, pictured, made more than over 100 appearances for both Fulham and his hometown club Torquay United before spells at Merthyr Tydfil, Taunton Town and Bideford.

After two years as Gulls assistant manager, he joined Plymouth Argyle’s academy in March 2018 as a lead coach.

Herrera told the Dorset Echo on Wednesday he is sure success will come as they are doing the right thing.

“It’s tough, obviously the club’s been in decline a little bit,” he told Echosport.

“We’ve tried to come in and change things, change the mood. Whether it’s working is yet to be decided, but we’ve tried to do things in the right, positive manner.

“Hopefully as times goes by – I know we’re running out of time a little bit – we’ll turn it.”

Asked how he felt about Saturday’s 5-0 defeat at home to Salisbury, the former QPR, Torquay and Fulham full-back said: “It’s a difficult one to take.

“We need to say that nobody’s going to pass and protect the goal and our keeper.

“I’ve been in a situation like this before, so I know how it is. It’s going to take some work, changing a few bodies, which we’re trying to do.

“When you’re a team that’s languishing down the bottom not many people are jumping to join your wagon. There’s work to be done.”