Posted on 31st March 2020 by admin in Latest News, Southern Leagues with 0 Comments 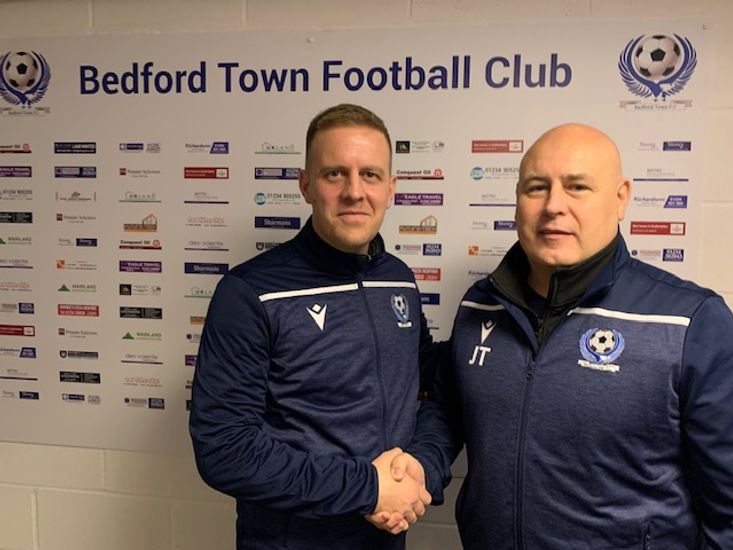 Mark Ducket will be guiding Bedford Town next season whenever it starts after the coronavirus crisis, the BetVictor Southern League club have confirmed.

Ducket, who quit Spartan South Midlands League Premier Division side Eynesbury Rovers in January to succeed Nathan Abbey, had been initially appointed until the end of the season by the Eagles.

He’d successfully occupied the Eynesbury hot-seat since 2015, leading the club to four successive top-seven finishes in the United Counties League’s Premier Division. This season he’d masterminded their best ever run in the FA Vase to the fourth round.

According to a club statement on Monday, he’d been asked to extend his stay after showing the “hunger, desire and competence” needed to take the Eagles forward over the last three months before the season was terminated last week.

The Eagles said: “At a virtual committee meeting last week, all members agreed that it was right to give our full support to Mark as we go into next season.

“He was fully aware that decisions about the future of the role would be made in April, and after last week’s announcement that this season was over, the club have acted quickly to cement his position and start building for the new campaign.

“We’re also delighted to announce that assistant Martin Standen, and coaches Ronayne Marsh-Brown and Gil Octave have all agreed to continue in their roles next season.”

The Southern League Division One Central club’s owner and director Jon Taylor explained why he was backing Ducket to the club’s website:

Pictured with Ducket, he said: “It was a real pity that the season had to end how it did, as I thought the team was starting to click and we started to get some real team spirit and cohesion amongst the lads.

“The players in the last five or six weeks have been superb. Their attitudes and will to pull together is only a testament to the management team and this has been well co-ordinated by Mark Ducket, the manager.

“If the league had carried on and in our current form we could of been sneakily knocking on the door for a play-off spot – personally the players and management team would have been 100 per cent deserving of this too as they have all been committed to the cause and dedicated to the job in hand.

“I have on behalf of the other owners and the club committee decided the right decision would be to re-employ Mark and his management team at the helm for our next challenge to get out of Step 4. The manager and his team have worked tirelessly behind the scenes to assemble a promising squad that with a few additions could be certainly a side to be reckoned with.

“I have been very happy with the results in the last two months and I don’t believe that there are many young managers with the appetite and ambition to take our great club forward. Since Mark’s arrival he has been very good with the group of players and he has also got us playing some constructive, creative, attacking football with mainly a three-man pronged attack.

“He definitely deserves the chance to recreate the optimism he had with the last few weeks – it will be up to him and his team to ensure we are hovering around the play-off spots all season. I am confident that the decision I have made to keep Ducks on will only be proven by the results on the pitch and he has the ability as a young and energetic manager to aspire to this.”

He added: “I know Mark is a highly driven individual, who has good knowledge in the game with players and contacts and I am very confident he will work his socks off to bring success back to the Eyrie. This will be nothing less than what we as a club all deserve.”

Make sure you get your copy of The Non-League Paper this week for all the latest news in one place on the impact of the coronavirus crisis on society and football’s fightback.

In shops on Sundays and Mondays, it’s always available as a pound-busting digital edition and full replica of the printed paper. Save cash on single issues, even more on longer deals and the pages still rustle too!