Graeme Tomlinson returns to Bedford Town to pass on his prowess

Posted on 8th July 2020 by admin in Latest News, Southern Leagues with 0 Comments 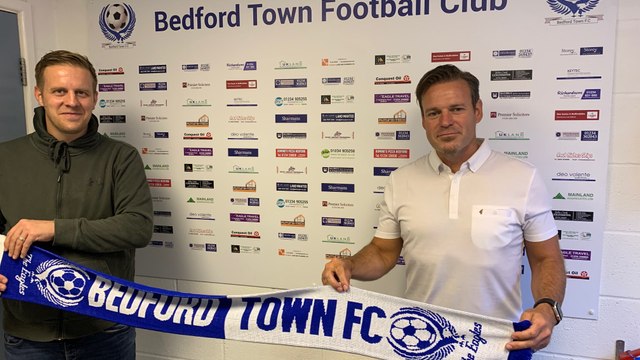 Ex-Eagles striker Graeme Tomlinson has been welcomed back to Bedford Town as a first team coach with open arms nearly two decades after leaving.

The 44-year-old former Exeter City and Macclesfield Town forward returned to the Southern League Division One Central club this week having played under under Kevin Wilson at the Eyrie back in 2003.

Ronayne Marsh-Brown, who will work alongside Tomlinson with Gil Octave on Mark Ducket’s management team, hailed Tomlinson as a “legend’ in a statement on the club’s website.

Pictured alongside Ducket, Tomlinson signed for Manchester United from Bradford City in 1994 before a broken leg wrecked his Old Trafford dream. He bounced back scoring goals for a host of Football League clubs including Bournemouth, Luton Town, Millwall and Wimbledon.

Our limited edition NHS thank you shirts are still available to order. The cost is £50 with all proceeds going to the NHS as a fundraising donation. Please get behind your club and your local health service by supporting this fantastic cause! Order via https://t.co/Oz7fMCMvO5 pic.twitter.com/WIO9Mzy1lK

Ducket said: “We’ve managed to secure the services of an experienced individual who has played at the top of the game. Graeme brings professionalism and I look forward to his knowledge being passed on to our exciting squad.”

Since retiring and becoming a successful businessman, Tomlinson has also coached at Barton Rovers. His son 19-year-old son Connor, another striker, is also on the Eagles` books after arriving from Luton Town last summer.

Tomlinson told the club’s website: “I’m pleased to be involved with the club this season. Obviously, I have a keen interest in Connor’s development. However, Bedford is a club I have supported and look forward to being able to be involved in what we all hope will be an exciting season.”

“I have supported and look forward to being able to be involved in what we all hope will be an exciting season.”