Sun, Sea And The Smell Of Success For Southend Manor

Posted on 1st October 2014 by Matt Badcock in FA Competitions/More News, Featured, Step 5 and below with 0 Comments 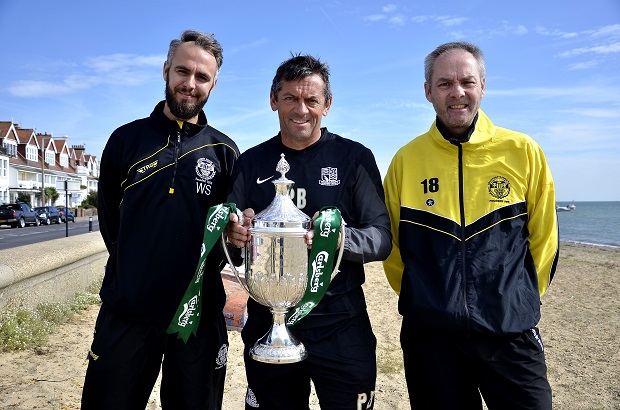 THE NLP took the FA Vase for a day at the seaside this week – but it wasn’t all candy floss and arcades as Southend Manor got a chance to get their hands on the famous trophy.

Seal’s Manor take on Eastern Counties League Wivenhoe in the second round qualifying on Saturday.

And it was the perfect warm-up in the sunshine with Shrimpers chief Brown – a Wembley winner himself when he took Hull City into the Premier League in 2008.

“I’ve been to Southend Manor to see them play,” Brown, who got his break in the pro ranks as a 20-year-old with Hartlepool, said.

“I used to live in a hotel along the way and one of the girls on reception had just started going out with the young goalkeeper.

“So she invited me to a game and I watched Great Wakering Rovers beat them 2-0. It took me back – the old Non-League nights where you’re playing in the dark.

“And it really is the dark, it’s like you’re under a two watt bulb. It’s difficult to spot things! But it brings back good memories. To go to Wembley in your career is fantastic.”

Seal was handed the first-team managerial reins in the summer after a successful first season in charge of their new reserve side, formed to plug the gap between youth and men’s football.

The Manor have bright ideas to boost their future. Club policy dictates no one over the age of 21 plays for the reserves and next season they are planning to introduce Elite Age Groups between 14-16, with age-related managers.

Seal, who was recently joined on his coaching staff by Marc Nurse, said: “Everyone talks about blooding youth, but do they actually do it?

“That’s at all levels of the game. I’ve a firm believer in backing things up with my actions and I’ve done that so far.

“The rest of the town are looking at our results on paper, but what I want, and what the club wants, is in two or three years’ time to have a team to be massively proud of and maybe go on some fantastic cup runs. That’s the game
plan.”

“In the past we’ve never managed to move a player into that level of football. Within five weeks of Wayne starting as first-team manager he’s managed to get someone an apprenticeship there.”