Posted on 28th August 2015 by Matt Badcock in FA Competitions/More News, Step 5 and below with 0 Comments 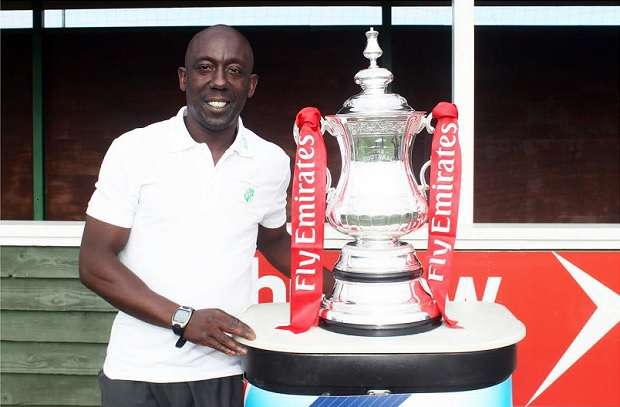 RUEL FOX’S van is parked up in Whitton United’s car park. ‘Ipswich Five Star Boot Camps – Guaranteed results or your money back’ is emblazoned on the side, complete with Fox’s mobile number.

Google the cult Norwich City hero and the third result that pops up is: ‘Whatever happened to Ruel Fox?’ Well, here’s the answer.

A personal trainer, he runs fitness sessions next to the Greens’ ground and designs diet plans for his clients.

On Wednesday evening, he had another session booked in, but before then Whitton’s director of football is happily posing with the FA Cup and sitting down with The NLP for a chat.

“I’m on the other side of it now. Before, as a player, I used to hate exercise!” Fox laughs. “But, with my knowledge through playing and being involved in sport, it works well for me.

“It’s diet and fitness. They come to me three to four times a week, we have a bit of fun and I do their diets and exercise. It’s going well, I’ve had a good response.”

Despite making his name across the Suffolk border with the Canaries, the former Newcastle United and Spurs winger is happiest in his home town.

Whitton United is the club where it all began and that’s why he’s been about the club ever since he retired.

“My heart will always be here,” says the 47-year-old. “I’m an Ipswich boy, a Whitton boy. I lived a couple of miles up the road.

“Climbing over the fence, sneaking into the grounds – we did all those sorts of things – putting the jumpers down. It was fun for us.

“Most of the football I learnt was playing on recreational grounds, playing at Christchurch Park with the older players.

“Whitton was our local team, so we all ended up playing for Whitton and it took off from there. The same people who used to come to my mum’s house to pick me up, help me with football boots when mum couldn’t afford them are the same people at the club now. John Green, the groundsman has been here 40 years, Tommy Woodward too.

“I come from a one-parent family, so little things people take for granted.

“Getting picked up, getting dropped off, when you ain’t got a pair of boots – they might be second hand boots, but they’re boots, you know. I had a pair of boots two sizes too big for me.

“But those little things you remember because they don’t have to do it. You pick that up and try to do the same. Help people out. It doesn’t have to be financial, it can be advice. So I’m just following in the footsteps of how I was brought up.”

Even when he was turning it on in the Premier League at Newcastle United, he shunned the glamorous side of the game to come straight home for the weekend after games.

Ruel Fox during his playing days for Norwich City against Arsenal

Fox draws satisfaction from helping push the Eastern Counties League side forward and lending advice to the kids who play in the club’s large youth set-up. He’s been chairman, manager, player – and even puts a shift in pulling pints.

“I played a couple of games but I got dropped so I didn’t play after that!” Fox says. “That was under Ian Brown, the Hadleigh manager. He’s a great friend of mine.

“He came down to help out when we were really struggling and I ended up having to help out playing.

“We’re an amateur club, we lose players and we have to reinvent ourselves. So, I ended up not wanting to play, but having to.

“I don’t mind. I’m not too proud. We have a veterans team here for the over-35s. I still play, though I haven’t got player of the year yet!

“Everyone pitches in. There might be days when I have to work behind the bar, but that’s how it is.”

Fox, therefore, knows the value of an FA Cup run. Manager Glenn Snell guided his side past FC Romania in the extra preliminary round to set up a home tie against Kirkley & Pakefield on Saturday.

“Every time you get through, it helps bring in money to reinvest into the club. For us to get through that last round is an expense back to the club.

“To have the FA Cup down here is massive for us. I never got near it, but I’ve walked past it.

“I got to the semi-finals at Norwich, but to have the trophy down here, I know it sounds corny, is great. If it puts us on the map a bit for having the FA Cup down here, we’ll take that.”