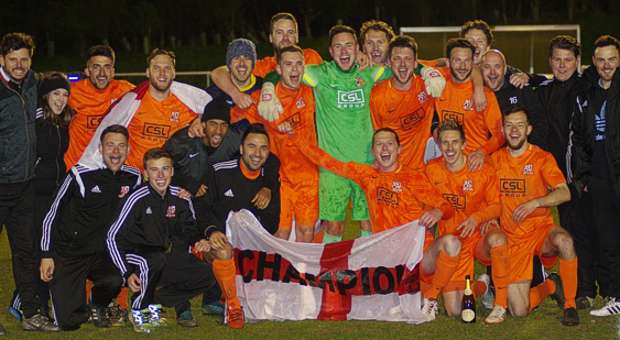 HARTLEY WINTNEY secured the Combined Counties League title by clocking up their 100thpoint of a memorable season last week – and the champions were then urged by midfielder Joe Paris not to go their separate ways.

The Row have also enjoyed brilliant FA Cup and FA Vase runs this term but there was an unfortunate sting in the tail as they were told earlier this month that their Memorial Fields home had failed a ground grading inspection.

It was a bitter pill to swallow with the side well clear of promotion rivals Ashford Town and Camberley, but for many of the players there was a horrible sense of déjà vu.

Paris and a large number of his team-mates were at Cove last season when, flying high, the rug was pulled with the ground deemed not good enough for Step 4.

The finance was then withdrawn and the team fell to pieces but the former AFC Wimbledon prospect says he doesn’t want that to happen again.

Hartley are keen to go again next year and make the improvements needed to progress into the Southern League and Paris says they should stick together as the team doesn’t require a face lift.

He said: “When we walked into pre-season on June 17 it was early but you could see from the moment we started there was a real determination to do something. It was almost a new team but we got to know each other and we never looked back from day one. Our squad has hardly changed from the first day of the season.

“The FA Cup and FA Vase runs were brilliant for us. We beat some big teams and in the end only Eastbourne Borough of the National League South and Hereford stopped us in our tracks.

“The ground news was hard to take, especially for the ex-Cove boys who moved over in the summer as we went through exactly the same thing last year. But the team is so close we didn’t let it put us off, we kept the wins coming.

“This is by far the best club in the league. The people behind the scenes have worked tirelessly – it’s unfortunate but we move on. We may not be able to go up but nobody can take away the fact that we are the champions.”

Hartley were confirmed winners last Tuesday night with a stylish 2-0 victory at Westfield. Their easy-on-the-eye football has been their selling point – and Paris wants his pals to recognise that there’s something good going on in the tiny Hampshire village.

“We have players who can play much higher than this standard of football,” added the 29-year-old. “It wouldn’t surprise me if teams do come knocking. If players do want to better themselves then good luck to them – however we all know how well we are treated here.

“I hope everyone stays together and we can challenge next season and complete the job by winning the league again and this time confirm promotion.”