The Non-League Football Paper
Home / Latest News / Step 5 and below / Promotion winners Bowers & Pitsea are a kit of alright!

Promotion winners Bowers & Pitsea are a kit of alright! 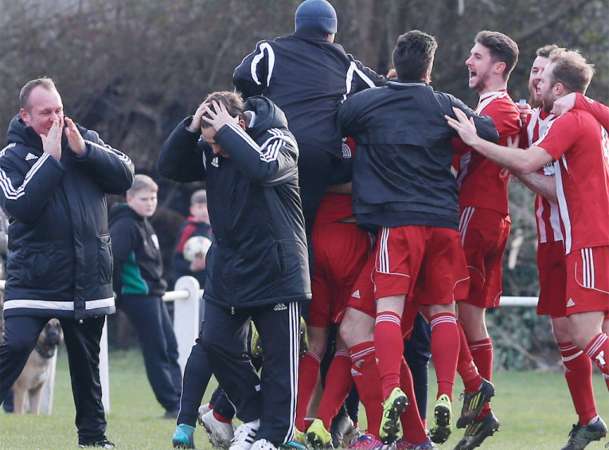 Bowers sealed the Essex Senior League title last Thursday night, although they were already guaranteed to step up because Basildon United haven’t applied to make the leap themselves.

It’s been a gruelling slog for Small’s side with 15 games in just over a month since they lost out in the FA Vase semi-final to Morpeth Town.

The 31-year-old boss admits he was worried the pile-up would scupper their plans, but says reaching their goal is just reward.

“We set out with a very clear objective this season and that was to get Step 4 football at Bowers,” said Small, whose side won 11 of their 14 games to clinch promotion.

“It’s been a gargantuan effort from everyone involved. Myself and the players will take a lot of plaudits for what’s been achieved – perhaps, rightly so.

“But what people who haven’t been involved in management might not realise is the demand and effort it puts on the volunteers at the club.

“Our kitman Wayne Adcock has had to prepare the kit every two to three days for a month.

“He has been here for 25 years. He gets a lot of stick and banter from the players and for people like him – maybe it sounds a bit dramatic – but you can’t underestimate the impact it will have on his life. How much it means to him – and others who gives us so much time unconditionally.

“Everyone has pulled their weight and I think our football club has got exactly what it deserves.”

Small takes great inspiration from Essex neighbours Concord Rangers who have risen up the Pyramid to the National League South since leaving Step 5 behind six years ago.

And he plans to keep the faith with the players who have got the club to their highest ever level.

“I’m very hopeful, perhaps naively, that this is my easiest summer in terms of player retention,” Small said.

“Managers make mistakes when they achieve success and they think they should immediately sign seasoned competitors at that level.

“But I really believe in the players we’ve got at Bowers. They’ve earned the right to play in the division above.”