Posted on 22nd May 2016 by Steven Coney in FA Competitions/More News, Step 5 and below with 0 Comments 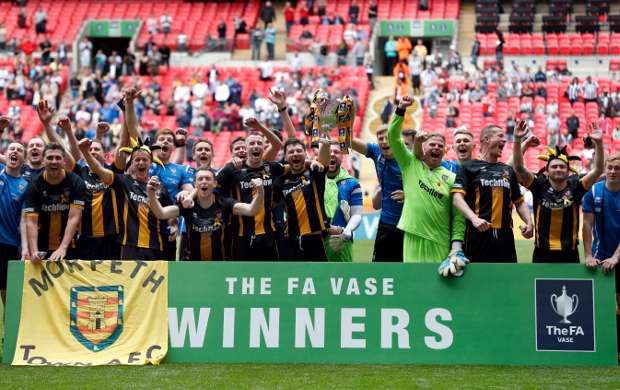 The Northumberland side’s victory, following wins from Whitley Bay, Dunston UTS, Spennymoor Town and North Shields, means the Vase is heading back to the north east.

Hereford had won all 20 of their cup games this season and won 22 in a row coming into today.

Roared on by over 20,000 from Herefordshire – as well as Ronaldo the Bull – Hereford tried but ultimately failed to secure a famous quadruple in their first season since forming from the ashes of Hereford United.

Despite taking the lead, the Bulls missed their chances early on and were made to pay. Veteran Morpeth defender Chris Swailes became the oldest scorer in a Wembley final at 45 as the Highwaymen went on to claim a deserved win.

Both teams would have been hoping to keep it tight at the back for the first 20 minutes but Morpeth couldn’t even last two minutes.

Hereford legend Rob Purdie received a pass from Joe Tumelty, raced through the middle of the pitch and unleashed a 25-yard shot that flew past Karl Dryden and into the bottom left-hand corner.

Sirdic Grant almost doubled the lead two minutes later but Dryden did well to deny him before the stopper then had to turn Pablo Haysham’s header round the post.

Morpeth responded with their first effort on target, Martin Horsell needing to be alert to divert Sean Taylor’s strike wide.

This was a typical FA Vase tie with plenty of crunching tackles flying in from both sides who were desperate to win on their first appearance at the national stadium.

Grant went close again, smacking a shot from the edge of the box against the crossbar and Haysham should have done better from Mike Symons’ cut back.

Hereford could have been three or four to the good and they were made to pay for their profligacy.

Swailes, who had keyhole heart surgery two years ago, netted the equaliser in the 34th minute, bundling a corner home off his chest after keeper Horsell had failed to claim the cross.

Morpeth took the lead just 42 seconds into the second period. Taylor’s low ball across the box found Luke Carr – who scored the winner in the semi-finals against Bowers & Pitsea – and he guided his effort into the far corner.

Then Taylor got a goal of his own. Michael Chilton controlled the ball well 20-yards out, fed the winger with a brilliant through ball and he kept calm to finish past Horsell.

Substitute Steven Anderson and Taylor both had shots well saved by Horsell and even though the Bulls introduced 53-goal John Mills, the prolific striker couldn’t get Hereford firing.

Fellow sub Mustapha Bundu saw a header cleared off the line by Morpeth’s Damien Mullen and that’s as close as they came to getting back into the game.

And the Highwaymen put the cherry on the cake in stoppage time, Shaun Bell netting a fourth via a heavy deflection just three minutes after coming on.