Posted on 27th May 2015 by admin in Featured, National Game Awards with 0 Comments 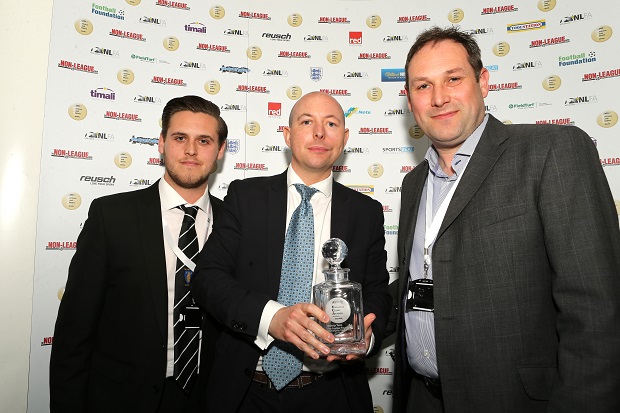 THE FOOTBALL FOUNDATION COMMUNITY CLUB OF THE YEAR – MERTHYR TOWN

MERTHYR Town have achieved more in five years than some clubs do in a century – and the biggest problem now is finding a trophy cabinet big enough to cope with all the silverware.

It’s a far cry from 2010 when Merthyr Tydfil folded. The new club, owned by the supporters’ trust, has brought smiles back to tearful faces.

On the pitch, there have been three promotions, the latest this season as champions of the Evo-Stik League Southern Division One South & West with more than 100 goals and points.

But the success has also been off the park as the club have made their Penydarren Park home, with its 3G pitch, a focus for the whole community. And it’s those efforts that enabled them to win the Football Foundation Community Club of the Year accolade.

Delighted chief executive Rob Price said: “Sometimes you have a feeling within your environment about what you are doing, but to receive this recognition from outside is very rewarding.

“When the board members knew we had won, they were over the moon. Someone actually said it meant more than winning the league this year! We are very committed to being part of the community.

“The club wasn’t run particularly well in the community in the past for different reasons, but slowly but surely we are changing that perception.”

Wednesday’s award wasn’t an isolated one. Last September Merthyr were named the McDonald’s Community Club of the Year by the Welsh Football Trust and the Football Association of Wales.

Price hailed the efforts of the club’s community development manager Elliott Evans. “He’a young lad, 21, and he does an awful lot of work for the club as do the small group of staff that work with him. He’s doing really well.”

Last August it was announced that the club had been awarded a grant of £1.8m to upgrade their home into a top-class community facility and work is due to be completed by the end of this year.

“The local council have been absolutely tremendous in sourcing funding for us,” said Price. “As a community club, you need that partnership with your local authority to be successful. They give us a lot of support.”

Merthyr boss Steve Jenkins added: “It’s going to be like a brand new ground, a magnificent facility. It’s already the hub of the community, but with the new facility it will be even better.”