Posted on 17th May 2020 by admin in Features, Latest News, Vanarama with 0 Comments 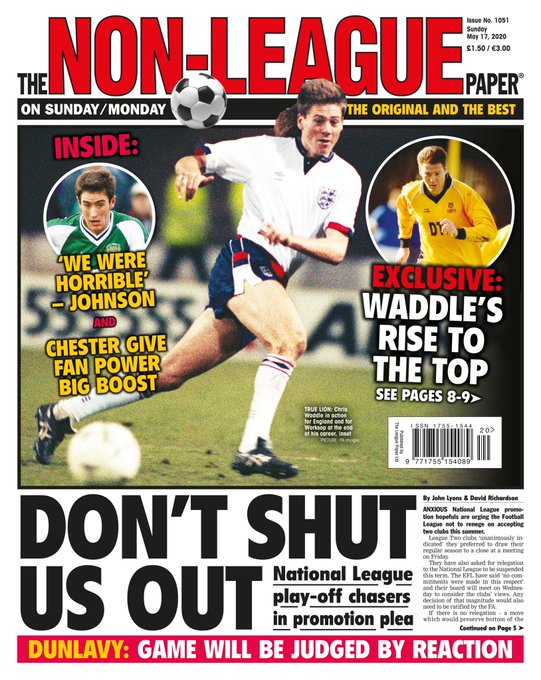 The National League’s promotion hopefuls are on the front page of The Non-League Paper today pleading with the Football League not to shut the door on taking two up from Non-League’s top tier.

Harrogate Town, Notts County and Yeovil Town are among those urging the EFL not to renege on accepting two up after League Two clubs ‘unanimously indicated’ they wanted to end their campaign at a crunch meeting on Friday before a non-binding vote called for relegation to be suspended this term.

After deferring a decision on play-offs last week until the EFL reveal their plans to deal with the damage wreaked by the coronavirus pandemic, the National League are now waiting on the outcome of a pivotal meeting of their sister competition’s board on Wednesday as football restarted in Germany this weekend.

Even with the public health crisis limiting the options open to the EFL, any move to deny Non-League the second promotion spot it fought so long and hard for before finally securing it for season 2002/03 would be of huge magnitude and need to be ratified by the Football Association.

Sunday’s NLP:
DON’T SHUT US OUT

?? Chris Waddle on his rise to the top

Yeovil Town’s joint owner Scott Priestnell does little to ease the worst fears of leaders Barrow of being denied automatic promotion to fill the void left by the demise of Bury, arguing in Sunday’s exclusive that the Bluebirds should be thrown into the play-off mix if only one berth is up for grabs!

Elsewhere among 32-pages of the latest news, big interviews and exclusive features, former England winger Chris Waddle talks about his love for Non-League and why he’s still playing at almost 60, Andy Morrell insists he’s a man with a plan for the Pitmen after the lessons he learned from the great Ian Rush and England C’s all-time top scorer Mark Carter is The NLP’s latest Non-League icon.

In print and online 24/7 as a full digital replica since midnight on Saturday, The NLP’s news pages are the only place to stay informed and entertained while getting the big picture in one place.

Try it today if you’re staying home, you’ll save cash as a one off or regular digital reader. The pages still rustle like the printed paper too!