Posted on 1st June 2020 by admin in Features, Latest News, Vanarama with 0 Comments 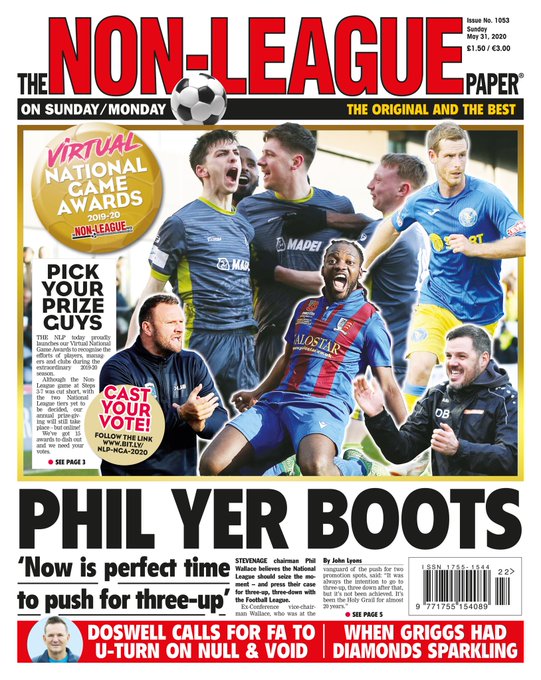 Stevenage chairman Phil Wallace is urging the National League to seize the moment and press their case for three-up, three-down with the Football League.

Wallace, who was at the vanguard of the push for two promotion spots when he was vice-chairman of the Football Conference, offers to campaign on Non-League’s behalf in an exclusive interview with The Non-League Paper.

The Boro chief, who admits to a vested interest with his club bottom of League Two and facing possible relegation from the EFL on points per game, wants the National League to offer to promote just one club as champions to replace defunct Bury Town.

According to Wallace, the National League should look long term, arguing that the money saved on parachute payments would then fund the third promotion spot and finally end their 20 year quest to clear the bottleneck at the top of the Non-League game.

The National Game Awards are also back this Sunday with a bang but not as you’ve ever known them with our annual accolades going virtual and the polls opening today!

Elsewhere among 32-pages of the latest news and exclusive features, Paul Doswell returns with his straight-talking column to call for FA to u-turn on nulling and voiding the coronavirus-blighted season and Billericay’s Jamie O’Hara opens up on his first campaign as a rookie boss.

Non-League’s greatest gaffers are also recognised with the launch of a new feature series while The NLP goes back in time to remember when Yeading’s cup heroes won the hearts of the nation and Brian Talbot’s Rushden & Diamonds conquered all.

Try it today if you’re staying home, you’ll save cash as a one off or regular digital reader. The pages still rustle like the printed paper too!