Posted on 6th February 2014 by Sam Elliott in Featured, Isthmian Leagues with 0 Comments 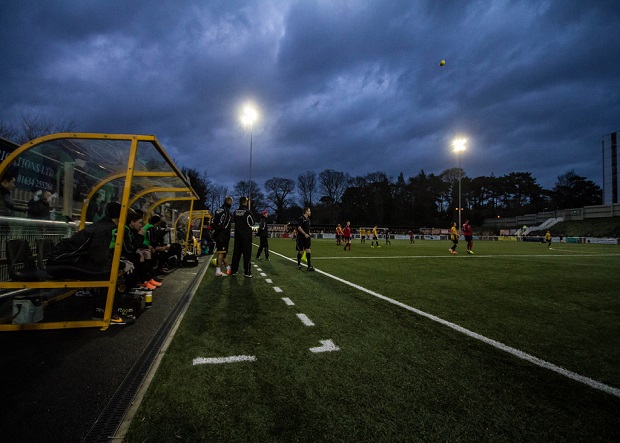 MAIDSTONE UNITED want a Skrill South and North compromise for their 3G pitch – or warned the Conference to prepare for a costly legal conflict ahead.

Member clubs on Wednesday voted to reject a proposal put to them to allow the synthetic surface to be used in the top two tiers in Non-League football.

The proposal was defeated by 21 votes to 11 votes at AFC Telford United’s New Bucks Head, meaning only grass pitches will continue to be permitted above Step 3.

On the face of it, the news came as a body blow to the Ryman Premier title chasers, but Stones co-owner Oliver Ash says the fact that North and South clubs were lumped together with one vote per four gives an unbalanced reflection of the mood for a relaxation of the rules.

Lawyers are said to have already studied details of the debate that has split the grass-roots game and indicated to the Kent club and its supporters Sutton United, Dorchester and Bromley that they have “a very strong case” with 3G in use in the Champions League and World Cup fixtures.

Ash stressed that Maidstone aren’t out to cause trouble, but want to meet in the middle inside the next three weeks to ensure their eligibility for promotion.

He told The NLP: “It is fair to say we still believe that if we were to win promotion from the Ryman Premier, we will be in a position to play in the Skrill South next season.

“We want a compromise, a fair compromise that suits all parties. We have a few things in mind, but one idea that is achievable would be to accept 3G in the North and South divisions. The Conference board simply cannot continue avoiding the issue.

“We want to take up the dialogue with them again and see if something pragmatic can be discussed before we have to look at alternative routes.

“I don’t think the legal avenue is one anybody really wants to go down but yes, we have had it looked at and yes, the conversations we have had suggest any possible case would be very strong.

“But we believe we can reach an amicable outcome. We feel there is scope for sensible conversation but are we going to sit back and accept things as they are? Absolutely not. Not when 3G is used so frequently at the elite end of the game.”

Ash said the voting at last week’s EGM was flawed – with Skrill North and South clubs, many of which having told the Conference they are in favour of plastic pitches, “not getting their voices heard”.

Since building the Gallagher Stadium, Maidstone’s crowds have rocketed. Their average Saturday gate since returning to the town in July 2012 is around 2,000 – and Ash says they have felt the benefit financially, making up to £200,000 a year by hiring out their all-weather home.

He added: “The vote was interesting, but not meaningful. The structure of the Conference voting system is somewhat bizarre. The 44 North and South clubs had eight votes between them – I’m not sure why they aren’t worthy of getting a vote each, especially as we know so many want 3G.

“Perversely, we are very positive about the whole thing. There has been a new dialogue with the Conference board, whereas in the past we have been at loggerheads with them. For the first time we were able to meet up with them and present facts and figures about the 3G business model.

“It’s on the agenda, but we need to push this forward. We need this compromise and we’ll do what it takes to find a sensible outcome.”