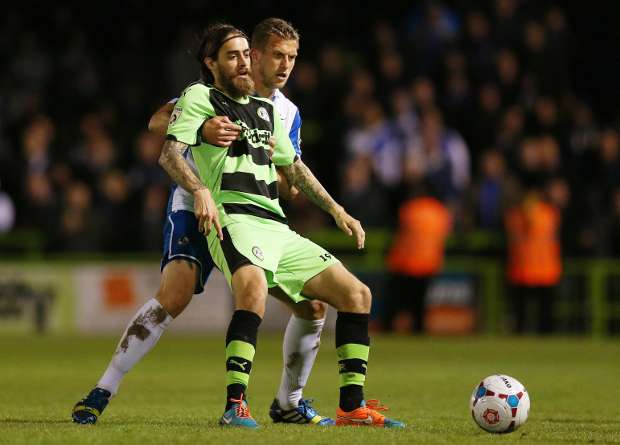 FOREST GREEN’S Rob Sinclair is hoping promotion will run in the family this season as his brother Stuart plots a late assault on the League Two play-off spots – and hopes to finally put behind him the injury that forced him into Non-League.

For the best part, the 2010-2011 season couldn’t have gone better for the 26-year-old midfielder. A regular in the Stevenage starting line-up and playing in a side that was pushing for promotion to the third tier, Sinclair was heading towards being a League One player by the age of 21.

There looked to be an incredibly bright future ahead of the Bedford-born starlet, but after suffering a serious tendon injury Sinclair sat out the next six months and had to look towards part-time football to kickstart his career.

“After I returned from injury there was a change of manager at Stevenage as Gary Smith came in, and I never really got my chance with him,” Sinclair told The NLP.

“I knew my old team-mate, Darrell Clarke, was manager at Salisbury, as well as my brother being there too, so I decided to leave the League and go to the Conference South.

“I managed to play near enough every game after signing in the January, and by the end of the season we won promotion through the play-offs so I was one step closer to being back in League Two.

“Since I moved on again to Forest Green I played over 40 games last season and near enough every game this season, so I know now I am well over my injuries I want to get back in the Football League and stay there.

“I’ve never played against my brother as he was injured last season for the play-offs, but honestly I wouldn’t like it at all!

“When it comes to the game you are professionals and you put your relationship to one side, but it’s not something I’d look forward to doing as we are best friends and it would be a little bit awkward.

“Especially with all the investment Bristol Rovers have had now they are in a good position to go up through the play-offs. “

I know my brother can play at a higher level, so hopefully we are both celebrating promotions come May.”

And with Forest Green now neck and neck with Cheltenham, Sinclair remains confident they can be caught with only eight games of the season to go.

“Our aim is to catch Cheltenham and we definitely think it’s achievable,” he adds. “If we can do that and avoid the play-offs then it’s happy days, we’ve finally made it to League Two.”