The NLP’s National League Team of the Day September 17 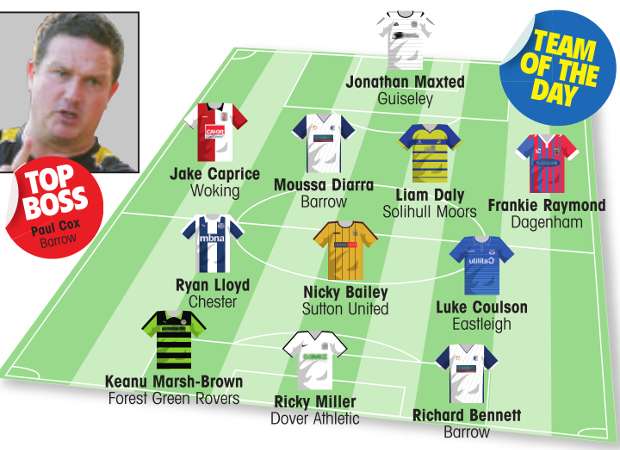 PAUL COX was named our Top Boss on Sunday after his Barrow side won 2-1 at leaders Lincoln City to push themselves up to fourth.

Richard Bennett scored the first at Sincil Bank and he was placed in our front three alongside Dover goalscorer Ricky Miller and Forest Green’s match winner Keanu Marsh-Brown.

Barrow’s Moussa Diarra also made it into our lineup and he was joined in defence by Woking’s Jake Caprice, Liam Daly of Solihull Moors and Dagenham’s Frankie Raymond.

Luke Coulson netted the winner for Eastleigh at Macclesfield and deservedly earned a place in our midfield trio alongside Sutton United veteran Nicky Bailey and Chester’s Ryan Lloyd.

Keeper Jonathan Maxted was kept busy in Guiseley’s draw at Maidstone and he was also handed a spot in our team as the Lions earned only their third point of the campaign.