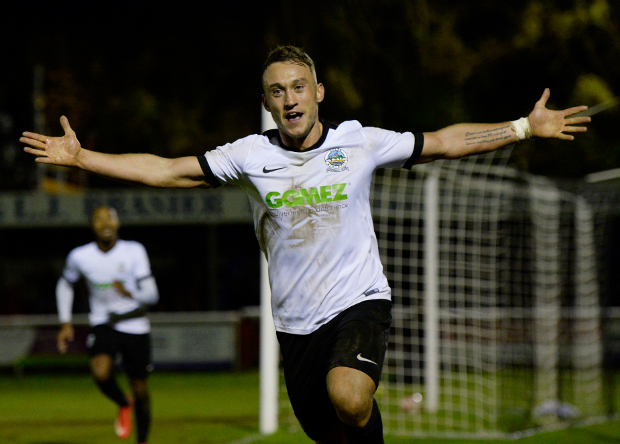 LEAGUE ONE side Peterborough United have won the race for Dover Athletic forward Ricky Miller after months of speculation over his future.

Miller, who was out of contract at Dover after scoring 40 National League goals, had been watched by a number of Football League clubs.

Posh, who have dipped into the Non-League market on a regular basis, were made to wait for the striker after trying to sign him in January, with Dover spurning their advances.

Miller, 28, was named the National League Player of the Year following a fantastic campaign with the Whites, scoring 42 times in all competitions.

And with an offer from his hometown club on the table, the former Luton Town and Boston United striker made the easy decision to put pen to paper on the three-year deal after passing a medical on Wednesday.

Posh boss Grant McCann told his club’s website: “I am delighted that Ricky has signed.  We are pleased it is all done and dusted now.

“He has been the top player in the Conference, has scored over 40 goals and he is a winner. He knows where the back of the net is and I am looking forward to working with him.”

Director of Football Barry Fry added: “To be fair, we tried to buy Ricky in January, but Jim (Parmenter), the chairman and owner of Dover and Chris (Kinnear), the manager, never returned my calls, but I admire that greatly because Dover had great ambition to get promoted.

“Ricky has done brilliantly to score the amount of goals he has and hopefully he will come here and hit the ground running.”