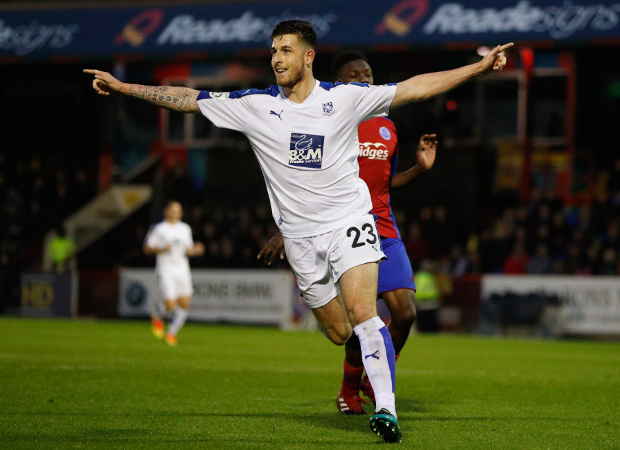 TRANMERE ROVERS striker Cole Stockton has swapped the National League for the Scottish Premiership after agreeing to join Hearts.

Stockton, who came through Tranmere’s youth system, will officially move north of the border when his Rovers contract expires on June 31.

The striker had been with Tranmere for six years but spent a large chunk of that time out on loan at Vauxhall Motors, Southport and Morecambe.

He returned to Prenton Park in January following his second spell at Morecambe and was a key part of Micky Mellon’s side towards the end of the season.

Stockton netted eight times in Rovers’ final 11 games as they just missed out on promotion in the National League promotion final at Wembley.

And Mellon will have to try and replace those goals after Stockton agreed a two-year deal with the Edinburgh-based club, who finished sixth in Scotland’s top tier last season.

Stockton told Hearts’ website: “I’m looking to take confidence from the end of my season into the next. Every striker’s got to.

“Every striker lives for goals, don’t they? If you get a goal early doors then there’s your confidence rolling, but I’d like to take the confidence from last season.

“I’m a big, strong striker but not like a target man. I can do both. I’m very good at holding the ball up, I can bring players into play around the box, and I’m a goalscorer.

“Goals win games, don’t they? But I can create chances for others.”

Tranmere have also lost midfielder Lois Maynard to Salford but have brought in Macclesfield’s Ollie Norburn while defender Ritchie Sutton has signed a new two-year deal.