Alex Narey: Let’s keep teams honest and have play-offs at the bottom too

Posted on 6th June 2017 by admin in Alex Narey, National League with 0 Comments 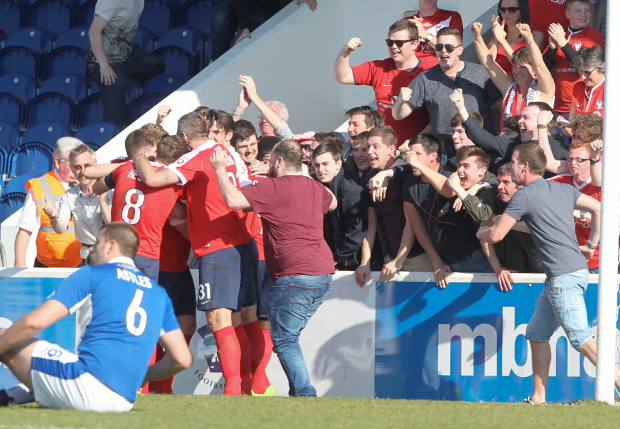 A LOT of talk about the play-offs at the moment and I understand it’s a contentious subject. Some love the play-offs, others hate them.

Some believe, where the National League is concerned, they should be scrapped with only the top two being promoted. Positions in the table are reflective of a club’s season, so do we need play-offs to determine who else goes up?

We talk about justice being served in football – why should one team suffer the ultimate injustice of the play-offs? That said, football would be a lot poorer without them.

Play-offs extend the excitement because sides with no hope of reaching the top two can still see a window of opportunity to sneak into the top five (or seven). There is also an argument that if you weren’t good enough to win promotion automatically, then the play-off pot is all you deserve.

Harsh perhaps, but it’s a harsh world. While we are all focusing on the top end, I’d like to get a bit revolutionary and turn our attentions to those teams at the bottom. What about play-offs to determine the final relegation spot?

Not only would it add to the excitement we all buy into as football fans, but it would help eradicate that age-old problem of teams and players just giving up when there is seemingly ‘nothing’ to play for. This bugs me.

A side reaches that mythical points landmark and the players are already thinking about their holidays. Take this season’s National League: North Ferriby, Southport, Braintree and York went down.

What if the bottom three went down automatically, in this case Ferriby, Southport and Braintree, and then York went into a four-team play-off battle with the other three teams above them – Guiseley, Chester and Woking.

To be fair, Guiseley were battling down to the last minute to prolong their National League status, while Woking needed a draw and results to go against them on the final day. But Chester lost their last six games.

They effectively guaranteed their safety on April 1 with a 1-0 win against Torquay. After that there was nothing; the sting went out of their play and their fans were subjected to a trail of drivel at the season’s end.

I wonder if those players would have put in an extra shift for their manager Jon McCarthy had the threat of relegation loomed over them? Actually I don’t wonder; we all know the answer.

Because Woking finished in 18th, they would face 21st-place York over two legs, while Chester would take on Guiseley. The losers then go head to head in a final for survival at the home of the side that finished higher in the league.

No one deserves a day out at Wembley, and no tinpot trophy for whoever edges over the line. The method to the madness will ensure the teams above the drop zone can’t just carry on treading water thinking the job is done.

There will be less weakened teams, and leagues will become more competitive with those sides sailing along just below mid table looking over their shoulders.

Keep them honest. Keep them thinking. A load of rubbish? Probably, but there have been far worse innovations in the game. Golden and silver goals, anyone? I rest my case.