Harrogate Town still have hope despite agreement to scrap relegation

Posted on 16th May 2020 by admin in Harrogate Town, Latest News, National League with 0 Comments 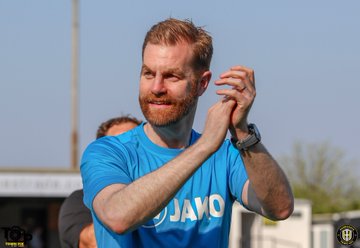 Weaver, pictured, says the agreement to write off their remaining fixtures and vote 20-4 in favour of not demoting whoever finishes bottom hasn’t extinguished his second placed side’s chances.

In theory, it means only one club, rather than the usual two with a play-off berth, can be promoted from the National League for the abandoned 2020/21 campaign to fill the void left by Bury’s expulsion.

The Harrogate Town boss is hanging his hopes on the non-binding nature of the vote and the fact that the rest of the EFL and the Football Association must still be consulted and will have a decisive say in any decision eventually taken. 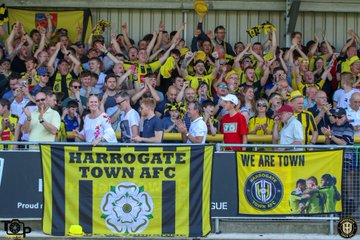 Weaver told the Harrogate Advertiser: “Everyone will have their own opinion or interpretation of what this means, but as the EFL has clearly stated, any proposals will have to be ratified by both them and the Football Association.

“It was only this week that Greg Clarke [FA chairman] came out and said they would veto moves to void seasons or cancel relegations. The FA are the governing body and those comments were only made a few days ago. And, even if there is no relegation from League Two, that doesn’t mean that there won’t be any promotion out of our division.

“Surely everything has to be the same across the board. So if there is promotion but no relegation in League Two, then the same thing must happen in League One. If that is the case, then the teams that go up into League One will leave spaces in League Two that need to be filled.”

League Two clubs weren’t expected to vote to relegate one of their own should their season fail to reach its natural conclusion and the Harrogate Town manager wasn’t surprised by the outcome of Friday’s meeting.

He added: “I expected that this might be the outcome. It comes as no surprise to me. Everyone is obviously looking out for their own interests and that is to be expected. We’ll just have to wait and see.

Check out the clip below and standby for a bumper new episode of Talking Town to drop on Saturday @ 3pm on @HarrogateTown official YouTube channel!

“You can never go into a weekend fully confident about what the outcome of this situation is going to be. You remind yourself of the stance that the FA took at the start of the week and the comments that Michael Tattersall [National League chairman] made about keeping in line with the EFL, and these things are reassuring.

“But, of course, I’m still concerned by the outcome of today’s meeting. How loud is League Two’s voice? Will they be able to change the FA’s mind? The unknown is a worry.”

For more news like this make sure you get your copy of The Non-League Paper this weekend!