GRIMSBY TOWN captain James McKeown has apologised to fans following the Mariners’ relegation back into Non-League – but has backed the character of the club to bounce back.

Town’s 3-2 defeat at Exeter City on Tuesday night confirmed their fate after five seasons in the EFL.

Stalwart McKeown was part of the squad that took the Mariners to promotion at the fifth attempt through the National League playoffs in 2016.

But this season has been a disaster for the Lincolnshire outfit with Paul Hurst, the returning manager who guided them to League Two five years ago, unable to prevent the drop in his second spell following Ian Holloway’s resignation.

In an emotional social media post, McKeown said: “I’m not sure now is the right time for this, or what it means if anything to be honest, but I feel a need to front it up as it’s easy to do it when things are going well. And I think the least I can do is apologise for what has happened this season. 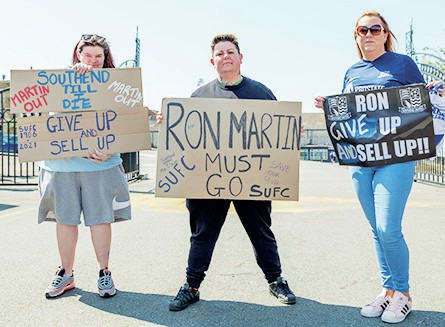 “I know I speak for all the players and we are feeling the same; I’m genuinely sorry to everyone connected with it as I know it affects so many people. It has dominated our life and everyone’s. But we can’t turn it back and must look forward.

“I know once this horrible, horrendous feeling slowly passes that this club/ Town will come back stronger than ever because of the support it has and the character of the people/ staff connected and involved in this place. I truly believe that. I’m so sorry.”

Grimsby are joined by Southend United, whose relegation was confirmed yesterday despite a 2-1 away win at Barrow.

Fans protested against owner Ron Martin before last week’s home against Leyton Orient and now the Shrimpers’ 101-year stay in the EFL has come to an end.

Phil Brown, who returned as manager for the final six games of the season, said: “We all go home and have those dark hours staring at the wall or looking at the mirror when you think I’ve let myself down, my team-mates down, my family down and the club.”