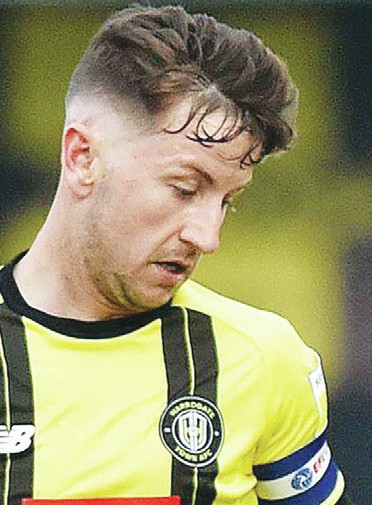 HARROGATE Town captain Josh Falkingham says another Wembley victory would ensure their season finishes on a high after securing survival in the Football League.

Town won promotion through the National League play-offs last August with victory over Notts County under the arch – and are now heading back to complete their Non- League farewell.

Midfielder Falkingham has been ever-present as usual during Harrogate’s League Two debut which saw them flirt with the top half and ultimately ensure another season at the level.

They now have the chance to lift some more silverware with their campaign set to come to an end next weekend at Cheltenham Town.

“The lads are buzzing, the camp is really good, we were lucky enough to play at Wembley last year and it’s a special place with special memories for us,” Falkingham told The NLP. “We’re really happy to be given the opportunity to complete the competition. We worked hard throughout that season and the semi-final this season which feels an age ago.

“We’re coming up against a really tough side in Concord Rangers. We know exactly what we’re going to be up against but we’ll be looking to go there and win the game and another trophy for the club.”

Falkingham has played a key part in Harrogate’s rise since joining three years ago, winning the National League North play-offs before succeeding in them again at the second attempt at Step 1.

The 30-year-old wants the club to keep progressing and believes a victory tomorrow will prepare them nicely for next season.

“We managed to secure safety which was the main objective in what has been a roller-coaster ride,” he said. “To do it over Bradford City, our closest rivals, was even sweeter but we weren’t celebrating, we want to keep striving to get better and keep moving forward.

“It’s been a year like no other, hopefully we don’t have to experience another one like that.

“We’re desperate to finish on a high and we’re really pleased to be in the Football League again next year.

“That will set us up for next season as well.”