The Moles are on their way to Wembley after clinching a dramatic fourth shoot-out victory which broke the hearts of underdogs US Portsmouth.

The Step 6 club were on course to claim their seventh higher-league scalp of their history-making Vase run until Liam Ferdinand struck nine minutes from time to cancel out James Franklyn’s first-half opener, and send the tie to penalties.

Chris Grace saved two US spot-kicks before Jack Broome struck the winner to keep their faultless record going – without having to do any extra work on the training ground.

“We don’t let them practise penalties at all,” joint player-manager Jamie McClurg told The NLP. “A few of them do it at the start of training but we never sit there and practise them.

“There’s a lot of experience in this side, penalties don’t faze them. We go into every game to win it, we don’t go in for penalties, but sometimes you’ve got to do it and we back them.”

McClurg’s managerial partner Carl Withers added: “There were a few choice words at half-time. We didn’t play as well as we could. Whether it was nerves, the occasion…we said how do you want to feel at five o’clock? Do you want to go to Wembley or not?

“When we’ve hit the post and the bar you start to think, ‘Is it not our day?’. But this team doesn’t give up. They deserve this success.”

The Hellenic Premier side had fallen behind when Callum Glen slipped in a wonderful pass to dangerman Franklyn, who swivelled in the box and swept a shot into the corner with his left foot.

Binfield’s task almost became harder five minutes into the second half when Franklyn jinked his way past centre-back Liam Gavin and into the box. His shot from an angle was saved by the legs of Grace and as the ball popped up back to him, he dropped a header wide.

The Moles should have equalised two minutes later as McClurg pulled back for Ollie Harris but he volleyed recklessly over from no more than eight yards.

The game had opened up with Grace saving from Dec Seiden and when the ball was put back into the area by Franklyn, Andrew Todd’s header was tipped over.

Binfield striker Ferdinand, who spent the first half of this season playing for Step 3 Harrow Borough and bagged a hat-trick in the quarter-final, finally got his first sight of goal in the 70th minute only to see his effort hit the post.

Flackwell Heath manager Marcus Richardson, having been beaten by US in the previous round, complained the crossbars at Victory Park weren’t high enough.

If his claims are correct, then Binfield’s Sean Moore can feel hard done by after seeing his header hit the woodwork moments after Ferdinand’s chance.

The visitors’ persistence finally paid off when substitute Sonny Harnett-Balkwill’s header back towards his own goal was short and Ferdinand nipped in to round goalkeeper Tom Price and finish.

Price scored in the shootout to give his side a 3-2 lead and then immediately saved from Moore. But Grace responded by denying Cameron Quirke’s spot-kick before McClurg equalised, with his keeper then saving from Jack Chandler to leave Broome to sweep up.

“Gutted, just absolutely gutted,” said Moneyfields-bound boss Glenn Turnbull. “I don’t think we deserved to win, they were arguably the better side, but at one-nil with ten minutes to go we should have been able to close that out.

“For all their possession and how good they were, we gave them the goal. This is their day, we’ve got to be big enough and humble enough to take it. We’ve fallen a bit short.” 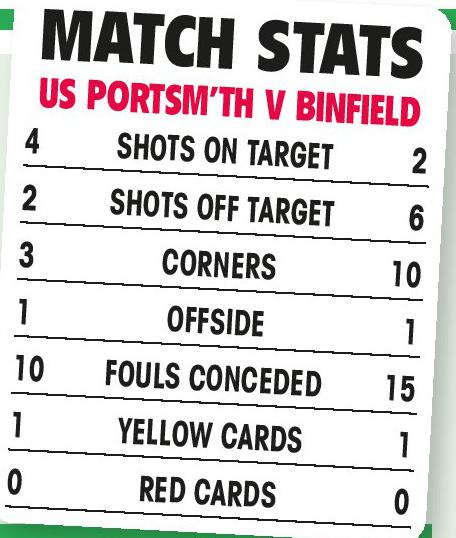