The former Newcastle United midfielder, who is good mates with the Urchins’ boss from their time together in the north-east, played for the club as a youngster before being picked up by Charlton Athletic.

Stimson’s Isthmian Premier side are unlikely FA Trophy finalists having beaten five higher-level clubs including Notts County to set-up a dream date with Hereford on May 22.

And local Lee will be cheering on the Urchins!

“I know Mark Stimson very well, he’s a good friend of mine,” Lee, who was meeting Stimson for a coffee on the morning he spoke to The NLP, said.

“He was at Spurs and I was at Charlton so we played against each other in youth team and reserve team football so I knew of him but I didn’t meet him until I went to Newcastle in 1992.

“He was already there and having another Londoner – as well as Gavin Peacock – around was good for me and we became good friends. Our paths have gone different ways but we’re still in contact and meet for a coffee every now and then.

“I’ve been wishing him luck in every round. They’ve done an unbelievable job, it’s a great achievement to get there. They’ve played some good teams. Notts County, way above them, is an unbelievable result.

“Every time I’ve wished him good luck I’ve though, ‘Ooh, that’s a tough game for them’. Every time they’ve come through and got the result.”

Lee grew up playing finals or taking part in athletics at the Hornchurch Stadium and recalls his days in the youth team with great fondness – including his first taste of men’s football! 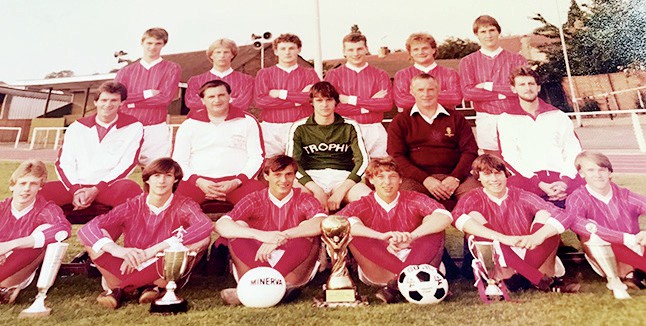 “I started at Hornchurch, wow, when I was 15,” Lee said. “Brian Kelly was the first team manager and Brian Davie was our coach.

“I actually played for the first team when I was 15 in a pre-season friendly. I remember thinking, ‘These guys are massive!’ They wanted me to sign but at the same time I got offered to sign for Charlton, which is what I did.”

Lee keeps a close eye on Hornchurch’s results and is a great admirer of their success under Stimson.

“You’ve got to have a great love for the game to do it and he has. He’s very astute. He always seems to get decent players. A lot of his Grays players went onto have good careers, played in the Premier League and it all started with him. He’s very good at getting players and then getting them to play.

“I thought Notts County would be a bridge too far. If someone gets it right they are a huge club. When I was playing there were in the Championship.

“So you think it’s going to be a tough ask for little old Hornchurch. But it goes to show it’s not all about the stature of the football club. It’s 11v11 and whoever has the most fight and will to win. You have to have a bit of ability and Hornchurch have that as well.”

Lee is a supporter of Prostate Cancer UK after his dad Reg was diagnosed and recovered from the disease that sees one man die every 45 minutes.

“Prostates and tests, it’s embarrassing for men and no one wants to talk about it,” Lee said. “It’s this macho thing but hopefully it’s changing now where people do realise men get these problems and they do affect everybody no matter how ‘manly’ you are.

“It doesn’t discriminate, anyone can get it, but it is treatable. It’s an awareness of the fact it doesn’t hurt to get something checked out.”

One man dies every 45 minutes from prostate cancer; it’s the most common cancer in men in the UK.

To find out about Prostate Cancer UK’s work in football, and get one of the charity’s iconic Man of Men badges go to www.prostatecanceruk.org/football