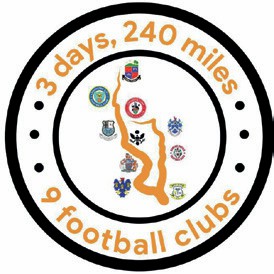 A CHARITY bike ride for one of Non-League’s most treasured characters George Melling has raised more than £12,000.

Earlier this year, ‘Big G’, as he is affectionately known, was diagnosed with Motor Neurone Disease (MND) at the age of 36, prompting the Non- League family to rally around in support with fundraising efforts.

A tough tackling central defender, Melling came through the youth systems at Blackpool and Morecambe before making his first-team debut aged 20 for Altrincham.

He then went on to play for a host of football clubs across the north-west including Lancaster City and Nortwich Victoria over the next 15 years, becoming a fans’ favourite wherever he went. Indeed, many of those former clubs have shown their support by raising funds. 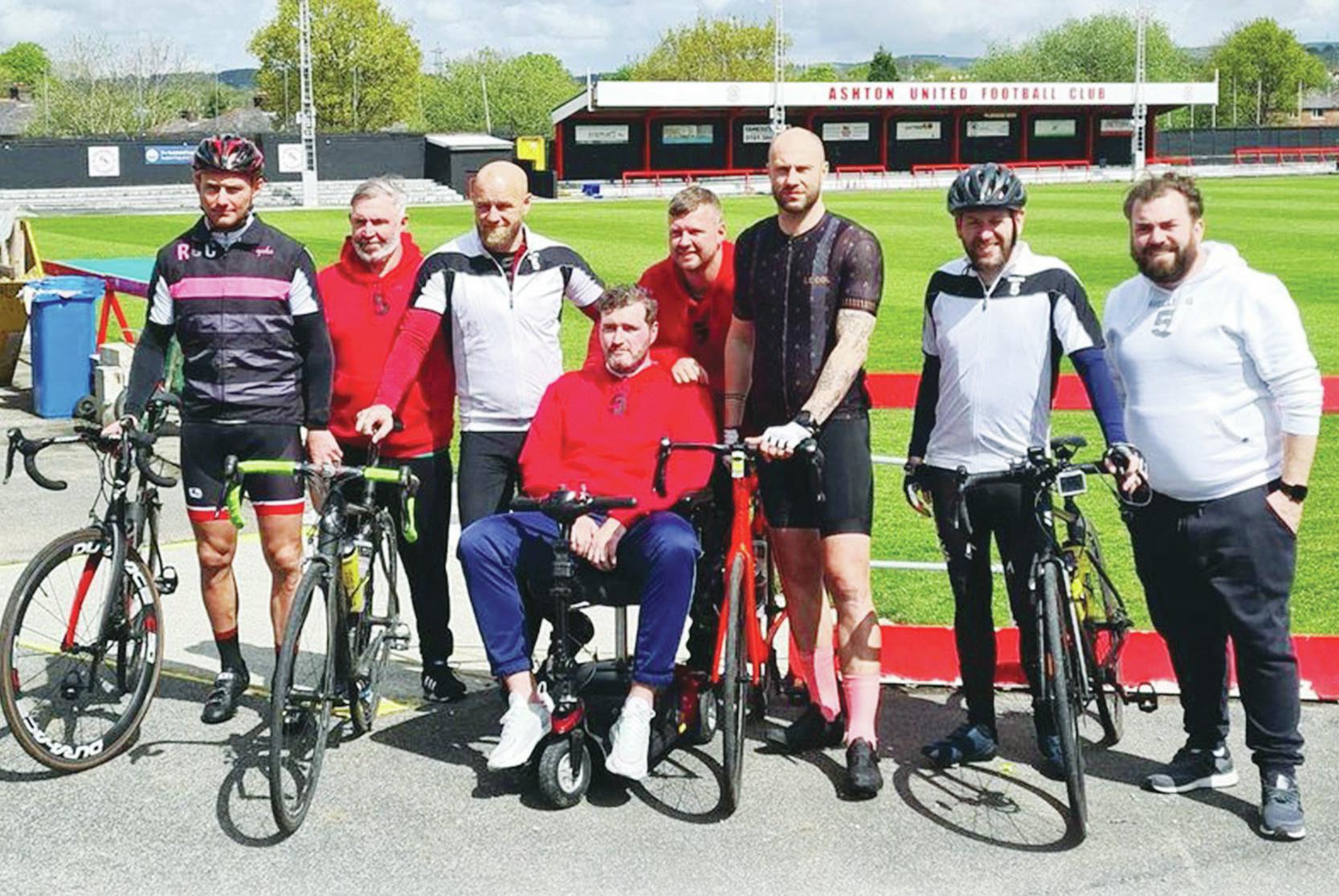 In April, over 30 people made up of George’s fiancée Nicci and a number of former teammates and friends, completed a special Three Peaks Challenge where they carried George’s body weight (101kg) on two stretchers across Pen-y-ghent, Whernside and Ingleborough.

Recently, two of his former managers, Lancaster City’s Mark Fell and Lee Ashcroft, at Longridge Town, carried out their own fundraising event Ride4George which saw their team – plus Non-League stalwarts Farrell Kilbane, Andy Teague and Danny Mahoney – venture out on a three-day bike ride, taking in several of Melling’s former clubs.

The group rode 240 miles over three days visiting nine football clubs. Ashcroft drove the main support vehicle whilst Fell completed all three days in the saddle, and he was quick to praise the fellow cyclists that helped pull him through.

“I am so pleased that we carried it off,” Fell said. “But I have to say that without the constant support throughout the trip from Farrell and Andy with regard to protecting us from the elements and driving us on when the going got tough, I would have struggled to get through it.

“The trip over the hills through Staffordshire into Leek in dreadful weather was really tough and I personally, as non-cyclist, needed their help through that period,”

“I must also say a special thank you to Danny who was brilliant at keeping all of our spirits up with his banter and singing throughout each day.”

The epic trip began at Kendal Town taking in Lancaster Town, Bamber Bridge and Coppull United, before the group ended their first day with a night in the Macron Stadium Hotel, within the home of Bolton Wanderers.

The second day saw them visit Altrincham, Northwich Victoria and Leek Town before an overnight stay in Macclesfield.

Former Wigan Athletic goalkeeper Mike Pollitt joined the intrepid group for the first two days of the challenge whilst George and Nicci were part of the whole epic journey, thanks in the main to the donation of a motorhome from A6 Motorhome Hire in Chorley, the company that had also provided a similar vehicle for The 3 Peaks Challenge in April.

Having survived the poor weather of the previous day, the group set off on the final day taking in Ashton United and Nelson before making it to their final destination of Longridge Town.

Fell was also full of praise for all of the clubs the group had visited. “The support from every club was fantastic, from the very beginning at Kendal Town right through to Longridge Town, with a great welcome from people at every ground,” he commented.

And Ashcroft added: “The whole idea of the trip was not just to raise funds for George and awareness of the MND campaign but also to give George and Nicci some respite at this difficult time.

“It was great to see George in such great spirits. At the end of each day, we checked into a hotel and on the Saturday night we bumped into my former West Brom teammate Chris Hargreaves, who was covering the Stockport v Torquay game the next day and he gave us a great mention on BT Sport, which was great exposure for what we are trying to do.”

“Every interview that George does, whoever he speaks to whether its TV, radio or newspaper he is so inspirational,” he added. “The way he is raising awareness of the disease is truly fantastic, he is still that leader that I have known for many years.

George himself admitted he was totally overwhelmed by the fundraising efforts of his friends, family and former teammates, giving special thanks to this latest fundraiser.

“I can’t thank Mark Fell enough for a monumental effort in organising the cycling challenge,” he beamed.

“Each and every one of the cyclists and the support volunteers, including another of my old teammates Keiran Walmsley, have been unbelievable over the three days, we can’t thank them enough.”

And Nicci added: “We would also like to thank A6 Motorhomes and Kelly Drew in particular for her help in providing vehicles for our fundraisers, they have played a big part in our efforts so far.”

If you would like to provide help and/or contribute towards the fundraising efforts – or if you just need more information – please email markfell17@hotmail.com or see Instagram @help_big_g