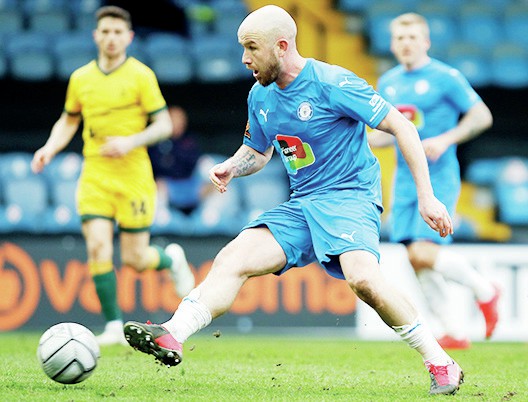 STOCKPORT County are the team that no-one wanted to face in the play-offs. Unbeaten in 18 league games after a narrow early March defeat at Weymouth, the Hatters have been imperious in recent months.

Of those matches, seven were draws and if four of them had been turned into wins then County would have pipped Sutton United to the title.

What their form did, however, was earn Stockport a third-place finish and give Simon Rusk’s charges a valuable extra week’s break heading into the semi-final phase where they meet Dave Challinor’s Hartlepool United this afternoon at Edgeley Park.

The Hatters, however, still had to negotiate a few bumps in the road. In January, the club took the decision to part company with legend Jim Gannon, while sitting handily fourth in the table.

Gannon had stabilised the club in his five years in charge and never finished in a lower league position than the season before. The general opinion amongst the fans was that it was the wrong decision. Gannon was one of their own and clinching the National League North title at Nuneaton in April 2019 was a day the faithful will never forget.

However, chairman Mark Stott then brought Brighton U23 coach Rusk into the club. Rusk built from the back but despite a 4-1 away win at Woking in his first game, the Hatters drew a blank in five of the next six matches, causing rumblings of discontent

Stockport County reporter for The NLP, Chris Pratt, gives his views on the Hatters

Big-name striker Paddy Madden and defensive midfielder Will Collar joined, along with Harry Cardwell and Elliott Newby on loan from Chorley. All excelled and Rusk’s men soon settled into a rhythm.

Relegated from the Football League in 2011, has left the club hungry for success and in his second year as chairmen Stott has invested money into the playing staff and a new training facility, while Edgeley Park itself underwent a facelift.

This clearly upwardly mobile club will have more chances in the coming seasons if they don’t win their next two games but will be desperate to accelerate that process starting with today’s game, in front of a fervent crowd against a strong Hartlepool side.

And speaking of Hartlepool, Richie Bennett was loaned out to them earlier in the year and promptly bagged five goals in four games for the Pools before being recalled, presumably to spare any more blushes.

What price a Bennett winner on Sunday? In this craziest of seasons who would bet against it?