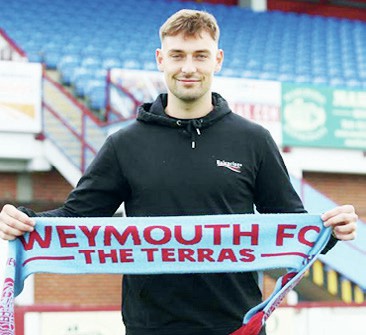 The Weymouth manager played with the 22-year-old centre-back at Havant & Waterlooville and has now brought him from AFC Bournemouth to shore up his Terras defence.

Cordner spent last season in League Two with Scunthorpe United and Southend United. He also has previous experience in the National League with Havant and Ebbsfleet United on loan.

“I know Tyler having played with him previously at Havant and Waterlooville,” Stock said. “He’s a player who has bags of potential.

“The one thing I love about Tyler is that he’s gone out and experienced those games at lower league level and also in the League at a young age.

“Sometimes when players leave academy football or at under 23s and they’ve not experienced those appearances it becomes a little bit tougher to find another club. Tyler has done that, he’s gone out and performed well.

“Aerially he brings a lot to the table. But for a player who brings the aerial side, he also brings the football side to the table, so he’s a big signing for us in that aspect.”