Andy Teague returns to Lancaster City after decade away at Chorley 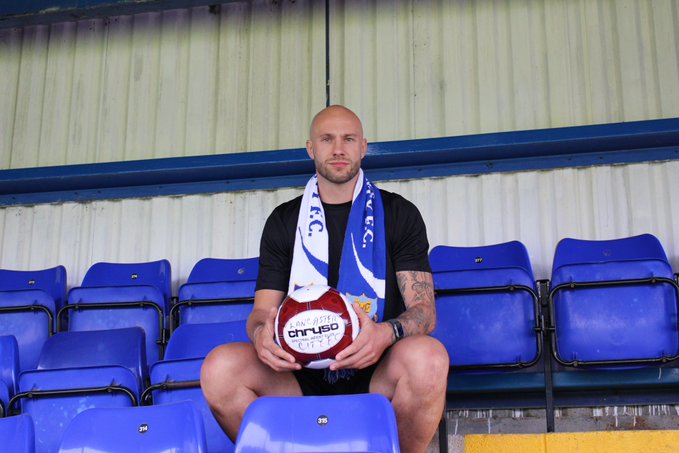 Andy Teague will be barking out orders for Lancaster City again next season after calling time on a decade at Chorley.

The Dolly Blues unveiled the 34-year-old as their first signing of the summer on Monday as manager Mark Fell prepares for the return of the Northern Premier League’s top flight.

Sold to the Magpies in 2010, the centre-back went on to play 390 games for the National League North club, winning three promotions under Garry Flitcroft and his successors Matt Jansen and current boss Jamie Vermiglio.

Teague, pictured back at the Giant Axe, has also enjoyed spells with Macclesfield Town and with both Tamworth and Hyde on loan. Fell told City fans his defensive strengths will be a welcome edition.

Andrew Teague talks his return to Giant Axe, his pre dolly days and the one and only legend, Neil Marshall. https://t.co/sjUvFpeQ7R

Fell told the NPL Premier Division club’s website “We probably didn’t have the defensive depth we needed last season and despite having the most clean sheets in the league, I felt we needed at least 1, probably 2 more defenders in.

“Teaguey has all the attributes we look for, he’s got a great attitude, great defensive qualities and is an outstanding leader. It’s been very straightforward, he wanted to play for Lancaster and we wanted him here.”

Jamie Vermiglio’s rock-bottom Magpies, still threatened with the possibility of relegation ahead of a key vote by National League clubs on Tuesday, paid tribute to Teague in a series of Tweets on Friday announcing their skipper’s departure.

After 390 games in the black & white stripes ANDY TEAGUE’S time at Victory Park has come to an end ?

We’re indebted to our captain for everything his done over the last nine and a half years & wish him nothing but the best for the future..