Home / Latest News / Step 5 and below / Picture this! Siaw’s support shows what the game should be all about

Picture this! Siaw’s support shows what the game should be all about 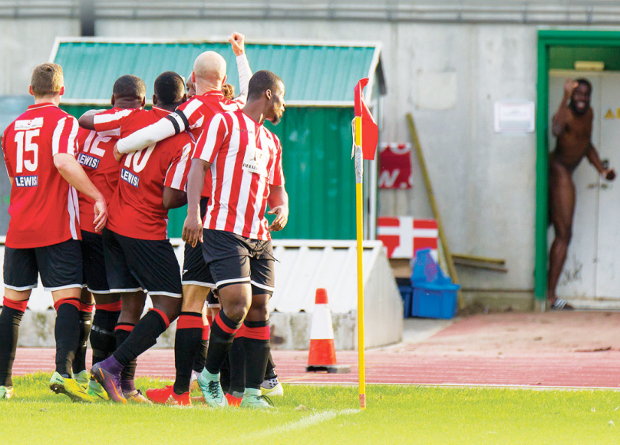 Off with an injury, captain Darryl Siaw was about to hop in the shower. But when he heard his team-mates celebrating, he put any concerns about indecent exposure aside to join in. Popping out of the changing room door (stop it!) he was able to offer his congratulations.

At the risk of going all A-Level photography on you, there is actually a lot more to this snap than meets the eye. Amusing, yes, but it also encapsulates what the game should be all about. Football is meant to be fun. Remember that?

At times, this sport is so in love with itself and takes itself so seriously it’s easy to forget that very basic point. When you were younger, and had less understanding of anything beyond the result on a Saturday, fun is exactly what it was. But cynicism eventually kicks in.

Football is also happy to exploit its customers. Sorry, supporters (slip of the pen). Charging over the odds to get into a top-level game, bringing out brand new kits every year and then asking for stupid money to buy one. Someone’s got to pay those big wages after all.

At times you’re treated like a child. No beer in view of the pitch – a good reason to go further down the Pyramid – and lock-ins after games. Football needs to remember, to borrow a quote, that it isn’t life or death.?There’s a lot of anger and bitterness in the world right now and football should be an escape.

This isn’t meant to trivialise the importance of the sport. People make their livelihoods from it and we see the good it does. It also provides moments you’ll never forget, whether it be a brilliant goal or winning a cup, in your entire life. It can bring families together and have people crying tears of joy.

Every week, thousands of players and supporters turn up because we fell in love with the game. And that’s why Siaw’s reaction is so perfect. Even nudity couldn’t stop him from joining in – flip-flops on, arm aloft.