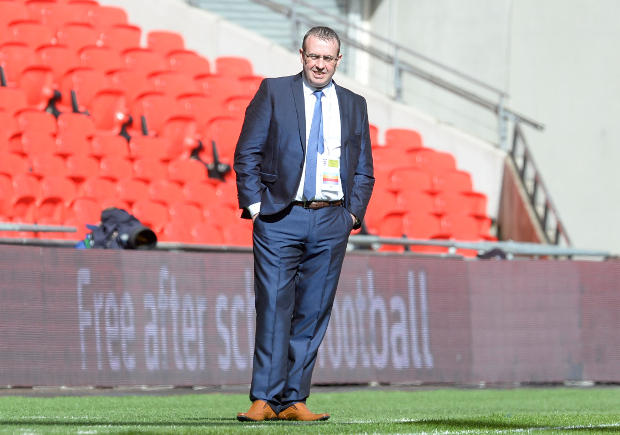 THE manager sacked after his team were caught on camera storming the dressing room of FA Vase holders Morpeth Town believes he has been hung out to dry.

Newton Aycliffe say they had a moral obligation to fire boss Peter Dixon and a number of its players after footage of the post-match clashes hit the internet following last Saturday’s third round tie.

It showed some of the squad and the management team force their way into their opponents’ changing room following an ugly end to the game. The violence was sparked after words were exchanged in the post-match warm-down.

One unidentified player was seen threatening and verbally abusing the Morpeth supporter who recorded the footage on his mobile phone. It didn’t stop the scenes going online and Aycliffe took “decisive” action.

Speaking exclusively to The NLP about the story that has made the national press, former West Auckland manager Dixon, who took his side to the 2012 and 2014 Vase finals, says he accepts his head is on the line when it comes to controlling his players.

But he believes Newton Aycliffe have been “hypocritical” – and in fact have not sacked any of the players like they claimed.

Dixon, who claims he managed the team on a voluntary basis, said: “First of all I respect the society we live in. I’m not a dinosaur, I know these scenes in a world of social media are not acceptable and that somebody has to be held accountable. I understand why they got rid of me, but I have been used as a scapegoat. I’m essentially their sacrificial lamb.

“If you watch the video you will see me in an Adidas coat far away from what’s going on. What did they expect me to do, be a referee in among 20-odd blokes scrapping? I wasn’t involved, but yes both sides exchanged punches – there is no place for that.

“Newton have not sacked a single player like they want you (the press) to believe they have. One or two have left out of loyalty to me but that’s it, the club haven’t got the courage.

“I don’t agree with the personal attacks on my character and also how Morpeth have come out of the whole thing with no criticism at all. There is guilt on both sides. I have failed to control my players and yes, I’m guilty of that, but they have hung me out to dry.”

Newton chairman Allan Oliver stopped short of confirming just how many of the club’s players he has sacked, but was quick to replace Dixon.

Former Aycliffe player Dan Mellanby and Dean Browne have been handed the job – and Oliver wants the pair to help restore the Northern League Division One club’s reputation.

“It’s been a very difficult week,” the chairman said. “But it was important that we acted quickly and we took decisive action. We have had to move on as a club and we have tried to draw a line under the episode as quickly as possible.”

Morpeth joint-chairman Gary Munday told the BBC: “I have never witnessed anything like that at a football match before.

“We are shocked and disgusted by what has happened, but we applaud Newton Aycliffe’s strong stance in dealing with the matter.

“We are a very family-orientated club, but unfortunately, we have had parents say they will never take their children to an away game again.”