Fantasy Non-League 2017-18 Details and How To Enter

Posted on 14th July 2017 by admin in Fantasy Non-League, Featured with 0 Comments 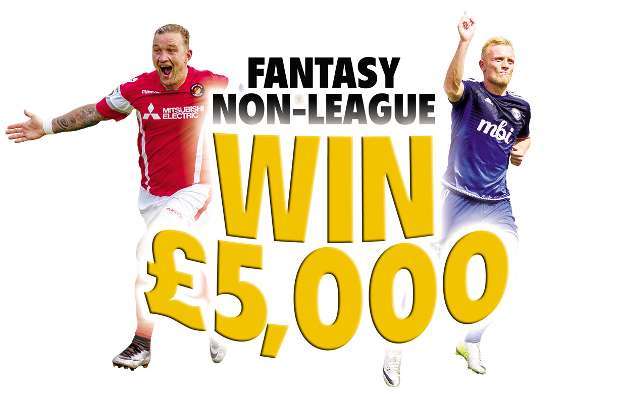 THIS season’s Fantasy Non-League will again cost you only £5 to enter. And for that you could scoop the first prize of £2,000.

If you enter the competition before it starts on Saturday August 5, you will receive an early entry bonus of 500pts. (That 500pt bonus will NOT count towards the first Manager of the Month).

If you are entering the com- petition to finish bottom and don’t want the 500pts please indicate that on the entry form or enter the competition after the season starts on August 5.

At the end of the season there will be cash prizes:

There are two changes this season.

1. I am removing the seven Wildcards from last season and replacing them with an extra bonus team in each of the seven leagues.

2. This season I am introducing two FNL JOKER TEAMS. Out of the 28 teams that you have picked you need to nominate two teams to receive double points. So, if you pick Ebbsfleet Utd say, as one of your Joker teams, if they score 29pts you will get 58pts that week. But, of course, if your Joker team loses and concedes four goals it will receive minus 5pts that will double up to minus 10pts. Indicate your two FNL joker teams on your entry form.

If you wish you can pick five substitute teams, but these five teams must be on your FNL 2017/18 Entry Form. (More on the substitutes later in this season’s rules).

Play-Off Games: Play-Off games will be awarded points as if they were league games. The Play-Off Final winners will be get 50pts.

The bottom team in each league will get 100 points.

Cup Winners will receive 150pts for the FA Trophy and 100pts for the other Cups. Play-Off Winners get 50pts. Substituted teams will be awarded half the End of Season bonus points.

3. These League and Cups are involved in this season’s Fantasy Non-League:

You can select five substitutes on your Entry Forms and out of those five substitutes you can use up to three. There will be only one substitution window – during December 2017 with your selected changes taking effect from Monday January 1, 2018. Details on how to use your substitutions will be released nearer the time during November.

To enter Fantasy Non-League 2017-18, you can print off the entry form here: FNLForm

Alternatively, you can pay using our Paypal form below.

Once the payment has been processed, please DO NOT click off the page as you will automatically be taken to a new page which will then direct you to the right place to pick your teams.