Posted on 19th July 2018 by admin in Featured, Features with 0 Comments 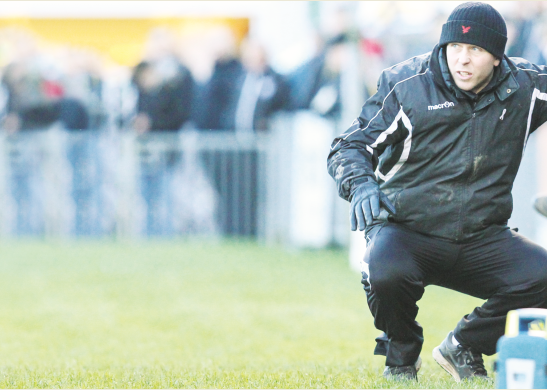 The former Bognor Regis boss took over the reins at Borough last summer but lacked the consistency needed to finish in the top half of National League South, avoiding relegation by four points.

Now ahead of the new season at Step 2, which looks tougher than ever, Howell is confident he can find a tune from his side.

“It’s been good here, I’ve enjoyed it. We’ve not done as well as I’d have liked but sometimes that takes time,” he told The NLP.

“It was a tough season in respect of not winning as many games as I’d have liked. I’m hoping to do much better this year.

“Last year when I came in it was all quite rushed and it was difficult. Some of the lads maybe didn’t want to be here. This year is the first time I can really put my stamp on it with my players and try and get my ideas across.

“When we had success at Bognor and the Trophy runs, we had a settled team for three or four years and they all knew what they were doing. Coming here, it was hard for me and the players to adjust and then you’re thrown in the deep end against good, organised teams. I thought it was a good challenge. Hopefully we’ve learnt lessons.”

Howell guided Bognor, the club he made over 400 appearances for and then managed for seven years, to the FA Trophy semi-finals and then promotion via the Bostik Premier play-offs the following season in 2017.

He joined Eastbourne for a fresh challenge, a club with a project centred around a newly installed 3G pitch and an ever-growing youth system.

South-coast Sports were named the National League’s Community Club of the Year last month and an U23 side has now been set-up to bridge the gap between the first team.

“Behind the scenes everything is great, we’ve got the 3G pitch and we’re trying to produce our own players,” says Howell.

“Geographically it’s very difficult being on the coast. An U23 team is what we felt we needed to do.

“We’ve got a great youth setup with a lot of kids and if we can encourage them to keep playing and coming through the system, we can have more people from the local area playing for the club. That’s the longer term goal.

“If I’m honest about it, everything is going really well, maybe apart from the first team so hopefully we can put that right this year!”

Signings have been slow and steady so far this pre-season. Charlie Walker, the former Aldershot and St Albans striker, has been brought in along with wideman David Martin, Mike West from Chelmsford and Charlton loanee Harry Pollard.

“I’ve tried to go with a bit more experience of the level which I thought we missed last year and people who are technically good,” adds Howell.

“We’re a couple of signings away as all managers are at this time- here, there and everywhere trying to get the right players in. I’ve got a few irons in the fire I’m waiting to hear from, but with what I’ve got at the moment I’m pleased.

“Any football supporter wants to know who you’re signing, wants the best players and wants it all done by May. Realistically, it doesn’t work like that.

“We’ve spoken to lots of players, missed out on some and some I’m still talking to.

“We know what we need to get and we’re confident we’ll get them in.”