Walton adapting to life in the dugout 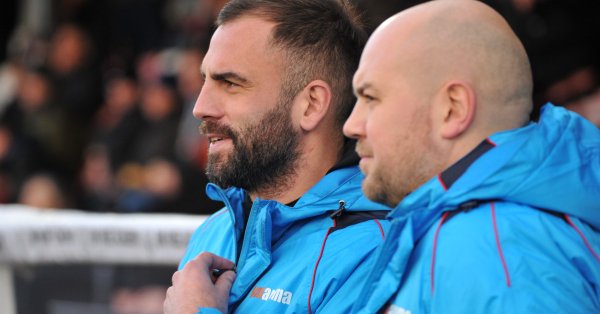 Before Simon Walton’s post-match media duties, he had to complete his post-match running duties – such is the life of a player-manager when you’ve only played a few minutes from the bench.

Their start as encouraged the National League club’s board to give them until the end of the month while they weigh up their third permanent manager of the season.

The Stones beat Oxford City 1-0 to progress into the FA Trophy but Walton admitted the performances was far from flawless and gave an insight into the conundrum they’re facing when it comes to submitting the team-sheet each week.

He’s enjoying the role, but to play or not to play? That is the question.

“Today was probably my toughest day because it probably needed me on the pitch at half-time,” Walton says on the Stones’ 3G surface that will host Maidenhead United tonight.

“Not that I’m saying I would have made a massive difference, but it needed someone like myself on the pitch playing.

“We delayed and delayed – that’s the kind of conundrum I find myself in at the minute. But I’m enjoying it.

“Winning games of football, when you win three out of four you can’t argue with it. We’ll keep going until something changes.

“We go out every day, give the lads the same memo and as long as we keep getting the same work-rate and attitude from them then I’m sure we’ll all be fine. Just at the minute it’s difficult because I’m kind of stuck in between.”

The former Leeds and Sutton United midfielder is probably exactly what the Stones need in the heart of their side as they battle for their National League status.

“Sometimes you can overthink it,” he says. “I’ve spoken to so many people about it. Do you play? Do you not? Everyone has got a different opinion so it comes down to me. We’ve played four games I haven’t played in and we’ve won three – maybe that explains it all!

“But, no, there will be times. It might be Tuesday, it might not be but one thing I’ve learnt from (last Saturday) is there are going to be times when I have to.”

As Walton says, whether that will be tonight when they welcome Maidenhead remains to be seen.

It’s a big game at the bottom of the division. Maidstone are being propped up only by Braintree Town but a win over the Magpies will seem them leap-frog the visitors on goal difference and put them outside the drop zone.