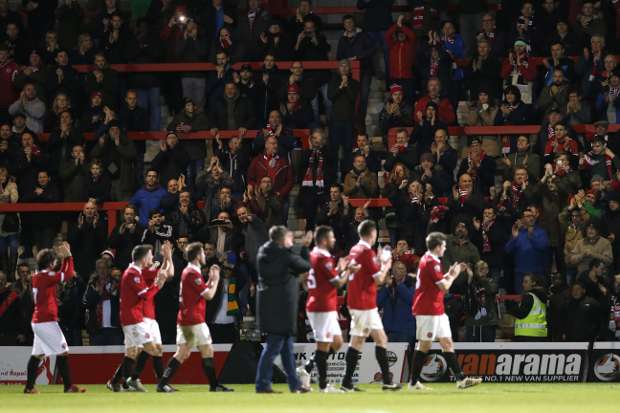 The Red Rebels have taken their time to get used to the £6.5m Broadhurst Park facility after moving in during the summer.

It was more a Theatre of Screams than dreams in the stadium’s first few months as they struggled to adapt to their new surroundings of the National League North for a while.

But three home wins on the bounce – and two seven-goal thrillers on back-to-back weekends – means the club’s supporters are singing a different tune.

Manager Marginson knows the fans’ force is helping turn the tide. After being 3-0 down after 45 minutes to title chasing Harrogate last weekend, a staggering comeback saw FC United 4-3 ahead just 11 minutes into the second half.

The club formed in 2005’s best ever comeback? It’s up there.

“You can’t forget about that 5-5 with Cammell Laird in 2008,” Marginson recalled. “We were 5-2 down and from nowhere got it level with a last-minute goal. But I’ve got to say Saturday was special. I don’t think it’s just a case of the players and staff settling in to the new ground, but the fans are starting too as well.

“When we’re shooting towards the St Mary’s Road End, we know we’ve got a chance. We know it’s worth a goal and an extra man. The stand is huge and the noise frightens teams. We know that no matter what the score is, if we’re going that way we’re not out of the game.

“It does remind me of how the Stretford End used to be at Old Trafford. When I used to go to United it was like a progression, you earned your place by your presence. Then, when you get a bit more about you, you head to the United Road, the Scoreboard End and then, eventually, the K Stand. It’s where boys grow up and where friends are made.”

Marginson, United’s only manager, believes his side are now getting to grips with Non-League’s second tier, adding: “We gave the players who took us up the opportunity to play in the league. Some have blossomed, some haven’t adapted.

“Because we average 3,200 at home games, we’ll never struggle to attract players.”