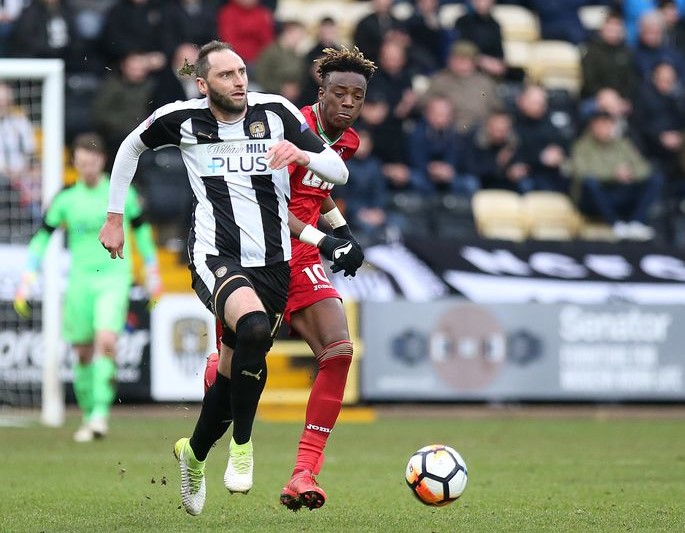 The vastly-experienced 36-year-old played a key role in the successful Bolton Wanderers sides of Sam Allardyce during the Premiership era, notching up 161 appearances after making his top flight debut in 2001.

Before being released by Crewe at the end of last season after playing his part winning promotion to League One with 25 appearances, Hunt enjoyed spells with Accrington Stanley, Birmingham, Bristol City, Derby County, Leyton Orient, Mansfield, Notts County, Rotherham and Preston.

Pictured surging forward for Notts, he’s made 458 senior appearances and scored four times, one a memorable goal for Bolton against Liverpool in the Premiership.

Quakers boss Armstrong believes the arrival of the former England Under 21 international will be a huge boost for his promotion-hunting squad when the new National League North campaign kicks off.

Armstrong told the club’s website: “Nicky’s vast experience in the game is going to be invaluable for us. He has played at a much higher level since 2001, and only last season was a regular in the Crewe Alexandra team that won promotion from League Two.

“He can play at full back or in the centre of defence. He is a very good organiser on the pitch, and will bring out the best in the players around him.”

Hunt said: “Alun was one of the first managers I spoke to after I was released at the end of the season, and he made me feel wanted.

“I’m really looking forward to getting back into football, having not played since March, and it will be great to catch up with Will and Michael, and the rest of the lads. Hopefully I can help get Darlington promoted.”