Home / Features / How Jamie Vardy’s rise to fame began in a Jeep driving back from Barrow!

How Jamie Vardy’s rise to fame began in a Jeep driving back from Barrow!

Posted on 13th May 2016 by admin in Features, National League, Northern Premier League with 0 Comments 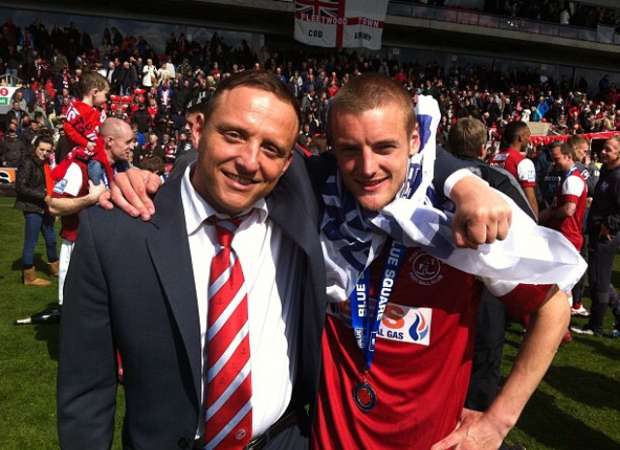 Dave Riche, a former NLP reporter who moved into the world of football as a Business Development Manager with Fleetwood Town, looks at the rise of Jamie Vardy and where it all began…

JAMIE VARDY’S having a party – what a chant and one the majority of football fans in the country will have had ringing on their lips over the past week as Leicester City completed their amazing journey and won the Premier League title.

But flashback five years ago and the hunt was on for a way to get hold of the striker who right now has the world at his feet.

On Tuesday August 23, 2011 I was sat in Fleetwood Town chairman Andy Pilley’s Jeep driving back from a humiliating 4-0 defeat away at Barrow and there was only one thing on his mind… Jamie Vardy.

Fleetwood were favourites for promotion and the chairman was determined to take his club into the Football League. He had already assembled a strike force full of experience and pace, but he wanted the final piece of his jigsaw.

At the time Vardy was making waves with FC Halifax Town at the top of Conference North and a run of 27 goals in 37 games had teams looking at him, but an asking price of £150,000 plus sell-ons was required.

In the Non-League Paper – the weekly “bible” for football chairmen, managers and players, an article was written which promoted the talents of Vardy but it was clear that a cloak and dagger approach would be needed to get his signature, with Football League clubs also in the hunt.

As we drove back from Cumbria in horrendous conditions, the discussion in the car was about one person and the chairman was determined to get his man.

Phone calls were made, and bartering was attempted but Halifax chairman David Bosomworth, who had signed Vardy for £15,000 from Stocksbridge Park Steels just a year earlier, was determined to cash in on his investment.

Fast forward 48 hours and a deal had been done and in the Friday night game at Highbury, the 24 year-old made his debut in a goalless draw with York City.

That morning Vardy had completed his first training session with his new team-mates and his pace left them all for dead! It wasn’t long before he began to rip apart what at the time was known as the Blue Square Premier.

The fairy-tale season gathered pace for Vardy as he continued his goal scoring exploits firing home 34 goals and scouts were queuing up to sign him but Fleetwood chairman Pilley – a shrewd businessman – was determined to get the best possible deal and knew he had something special on his hands.

The Cod Army were battling neck and neck with Wrexham for the title and Vardy was spearheading the challenge. In the FA Cup, the club were brushing Football League opposition aside and set up a mouth-watering clash with near neighbours Blackpool, who at the time had just been relegated from the Premier League and were looking to bounce back into the top flight under the stewardship of Ian Holloway. 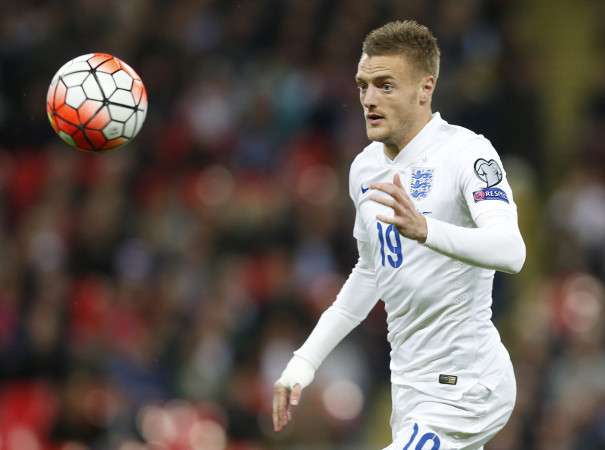 Jamie Vardy in action for England

Blackpool won the game on the day 5-1 but the name on everyone’s lips yet again was a certain Mr Vardy.

That night, some Fleetwood Town players and staff all went out for a few drinks and the talk was of a text that had been sent from Blackpool chairman Karl Oyston to his Fleetwood counterpart Pilley.

Fleetwood wanted £1million before they would even consider letting Vardy leave – and with the aim being promotion, they wanted him loaned back. Blackpool, whose fall from grace was just around the corner, bid £750,000 and it was turned down flat.

The January transfer window appeared to be crunch time, but everyone knew cash rich Fleetwood were not in a position to have to sell their star striker. Vardy was also told in no uncertain terms that he would not be sold for less than the club’s valuation and would be given revised terms to keep him on the ball until the end of the season.

The question was who would come up with the fee and the right overall package and when?

Off the field, Vardy was a great player to get to know. The Fleetwood team at the time had a great sense of spirit and were in it together both on and off the field. Vardy loved his football, but he also loved to let his hair down with a beer and was just quite simply one of the lads.

He would be quite happy sitting in the Golden Ball in the tiny village of Poulton-le-Fylde on the outskirts of Blackpool drinking a Crabbie’s Ginger Ale after training and getting to know the local tradesmen, who he would often sort out with tickets to the game at the weekend.

There was no arrogance, despite the headlines he was getting and the way he was doing his job week-in, week-out, scoring goals as Fleetwood went about their task of winning promotion to the Football League.

His mates from back in Halifax used to come and watch him and one week came in fancy dress as Oompa Loompas while doing a conga around the terrace as their mate performed heroics on the pitch.

The season was coming to an end, the league title was heading its way to Highbury but still no deal had been done. England boss Roy Hodgson, at the time at West Bromwich Albion, was a regular watcher and Southampton and Cardiff City were also firm favourites, with Leicester City closely monitoring affairs.

A team building exercise in Scotland with Fleetwood just before the final month of the season saw Vardy tweet he was up in Scotland and suddenly his followers went into their thousands as an internet rumour snowballed he was set to sign for Rangers!

At the end of April, Vardy celebrated with the rest of his Fleetwood team-mates winning promotion before it was time to do business.

Cardiff, Southampton and Leicester were battling neck and neck and in the end it was the personal touch of former Foxes manager Nigel Pearson that convinced Vardy to move to the King Power Stadium.

Fleetwood had landed a £1million jackpot, while his former clubs Halifax and Stocksbridge had gained substantial sell-on clauses and Vardy had seen his salary multiply almost 20 times by putting pen to paper with the then-Championship side.

Making that step up and the change in lifestyle has already been well publicised and he initially did struggle to settle. But a few visits back to his former club to see his friends, showed that despite the new found fame, Vardy was still the same person and determined to make the most of his opportunity.

He still has the same direct approach and pace that was ripping teams apart in Non-League football and back then, like now, he feared no-one.

To see him this season take the Premier League by storm, and score for England is real Roy of the Rovers stuff, and to think back to the cold wet night on the way back from Barrow is where it all began…

*NLP editor Stuart Hammonds went to Leicester this week to see Jamie Vardy launch his V9 Academy. To read his exclusive interview with the England star and find out how Non-League players can follow in his golden boot-steps, buy this Sunday’s Non-League Paper – priced £1.50!