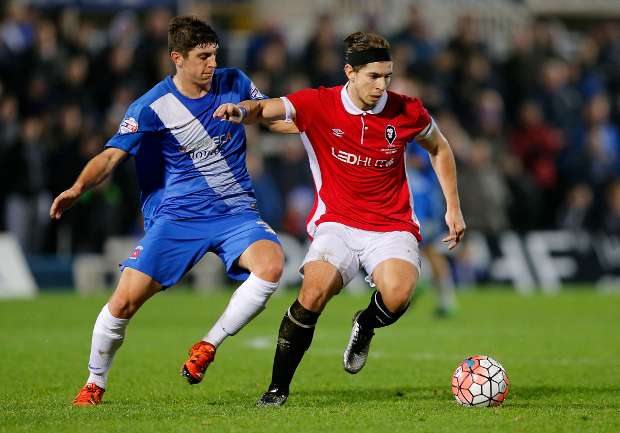 Poole, 27, enjoyed a memorable time with the Ammies after signing for them in September 2015 following a brief spell with Bury.

He helped them to promotion via the Evo-Stik NPL Premier play-offs in 2015-16 and also starred in their run to the FA Cup second round.

Poole netted nine times and had seven assists last season as Salford narrowly missed out on their third successive promotion, losing out to FC Halifax Town in the National League North play-off semi-finals.

With the Ammies now becoming full-time, Poole has moved on and will be returning to Step 3 with Altrincham, who have suffered two straight relegations.

Alty – who have also signed Salford winger John Johnston and Nantwich Town centre-back Ben Harrison – have turned to former Nantwich boss Phil Parkinson as their new manager and Poole says his new chief’s eagerness to sign him was key.

Poole told Altrincham’s website: “The manager got in touch with me as soon as it was announced I was leaving Salford and made me feel really, really wanted here, and that went a long way towards making my mind up.

“He told me his plans for the club, what his expectations were, what he thought of me as a player and where I would fit into the overall team pattern, and to hear him say all that was really nice. It played a huge part in me becoming an Altrincham player.

“It wasn’t a difficult decision, because his football philosophy is completely in line with mine. The confidence he has in himself as a manager, and in the way he sets his team up, was just as impressive. It was great to hear someone backing himself like he clearly does.

“I had one season in the Evo-Stik with Salford, and we got promoted and had an FA Cup run, so the same again next season would do nicely.

“I’ll be aiming for goals and assists, and I’m confident I can do that and contribute to a successful season for Altrincham.”