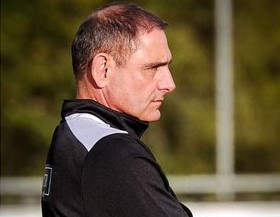 Bamber Bridge boss Joey Collins has stepped down as manager of the BetVictor Northern Premier League club for personal reasons.

Appointed towards the end of last season following a spell in caretaker charge alongside captain Matt Lawlor after the departure of Micky Taylor, Collins ended his reign with a 5-1 win over Wythenshawe Amateurs in the Lancashire FA Challenge Trophy on Tuesday night.

After steering the NLP Premier Division club to safety last season, Collins, pictured, took the job on a permanent basis with Taylor as his number two.

Unfortunately, the duo struggled in the league this term and especially on their travels, having drawn one and lost nine of their 10 away games. Collins left with Big 18th in the table.

According to a statement released by Brig on Wednesday morning, Collins was stepping down to allow him to spend “much-needed time” with his family.

Announcing the departure of Collins from the Sir Tom Finney Stadium, Brig said: “Bamber Bridge FC have announced that Joey Collins has stepped down from his role as first-team manager for personal reasons.

“Joey’s departure is by mutual consent and will provide him with much-needed time with his family.

“The club would like to thank Joey for all his efforts over the last eight months as first team manager and previously as a member of the club’s coaching staff, and wish him all the best for the future.

“Applications are not being invited for the managerial post. An announcement about interim arrangements will be made in due course.”