Posted on 15th January 2020 by admin in Latest News, Southern Leagues with 0 Comments 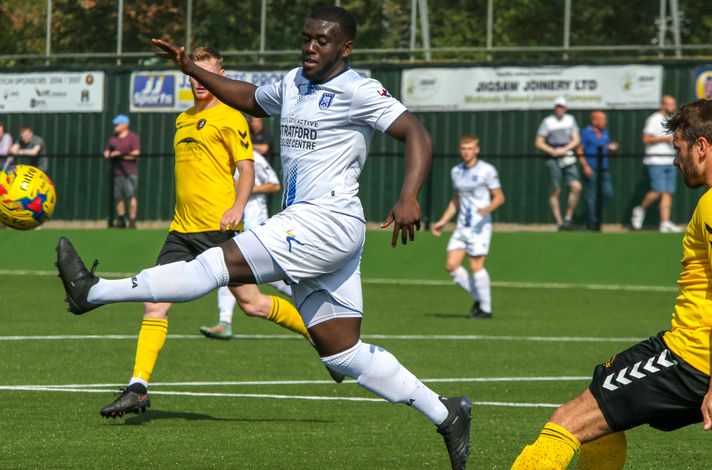 Born in the USA, the 24-year-old was with Northampton Town as a youngster before spending a year as part of the Arsenal Academy.

Since then, he’s scored goals for a host of clubs including Stony Stratford Town, Barton Rovers. Buckingham Town and Dunstable Town and is pictured playing against the Pics in their 2-1 win at Stratford Town on New year’s Day.

Pics boss Liam McDonald told fans he was delighted to sign the big frontman who’s proved to be a handful for opposition defences this season with eight goals so far.

He told the club’s website: “I have seen him play a few times this season, including against us, and he has been very good. He has improved greatly as the season has gone on and we want to help him continue that development.

“He had a good offer to go to another local club, which was closer to where he is based, but he felt it right to come to us and it shows where we’re at now as a football club.

“He’s powerful, quick and as strong as an ox. He has plenty of good attributes to bring to the table and looked lively in training on Thursday.

“It will take him a bit of time to adjust to the way that we play, but we want to bring good players in who have the right character and Chris certainly fits the bill. His arrival improves us and is another step towards where we want to be.”

Wreh told fans he was sold on the move after speaking with McDonald. “I played against Rushall recently and really liked their style of play,” Wreh said.

“They have a good, young manager who wants to play the game the right way and he really sold the style and his future plans for the team to me.

“The challenge of getting the team into the play-offs is one that I am really looking forward to.
“I’d say that I am a different type of player to most in this League; I like to drive towards defenders and bring others into play.

“I know that the decision to come here is the right one for me and I believe that I can help this club achieve its objectives.
“The main aim is to secure a play-off position and if I can score a few goals along the way, then I will be happy.”

Make sure you get your copy of The Non-League Paper on Sunday for the latest news from across Non-League over the last seven days, together with exclusive match reports and pictures from all of Saturday’s upcoming fixtures in the BetVictor Southern League.