Posted on 2nd August 2018 by admin in Columnists, Features with 0 Comments 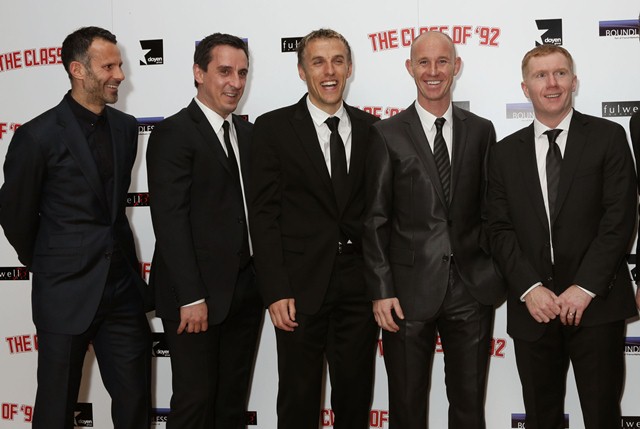 When Salford City signed Danny Lloyd I had to double check it. I thought, ‘It can’t be the Danny Lloyd from Peterborough – he scored a load of goals there last season!’ But it is.

He scored his first Posh goal against Wimbledon, I was there, after waiting for his chance in the team and he went onto have a really good season. Don’t forget, he scored a bundle of goals for Stockport County the season before last to earn his move to League One.

He could probably stay in League One so seeing him sign for Salford shows the Class of 92 really mean business.

He’s been in Non-League before so he knows what it takes. He’s been in this environment and lower down.

Then they’ve brought in Rory Gaffney and Adam Rooney. Any National League team who wins the league does it with a target man – John Akinde at Barnet, Danny Wright at Cheltenham, Paul Benson at Luton, Matt Rhead at Lincoln City.

Macclesfield brought in Nathan Blissett towards the end of last season and it got them over the line. I don’t know if they’d have won the league if he hadn’t come in because they moved to a Plan B where they went a bit more direct. It worked!

So Salford have got a target man, probably more in Gaffney, and they’ve also brought in quality elsewhere on the pitch.

Danny Whitehead was arguably the best holding midfielder in the division last season with Macclesfield, Nathan Pond has joined from Fleetwood with experience of the Football League and probably looking for a new challenge. Devante Rodney falls into that too. All the ability in the world, but probably needs a fresh start. The way they’ve gone about their business is a real credit to them.

The biggest decision they’ve made is changing the management. They’ve let go of two managers – Anthony Johnson and Bernard Morley – who did very well for them to bring in Graham Alexander, who has a lot of experience, as their man to get them up.

Look, the money they are spending creates a lot of debate. In the Championship you see players being signed for £15m and, like it or not, that slowly filters down.

The National League has a lot more credibility now. It’s not seen as the Vauxhall Conference or a league of part-time players. It’s seen as the fifth tier of English football that is a decent standard and has really good players – just look at how many are moving into the Football League each summer.

I don’t have a problem with the money side of it. The only time it’s an issue with me is when a club denies they’ve got it. Sometimes you’re in a fortunate position to be in that situation and other times you’re not. Five players that have won everything at the highest level are not only putting their money in but they are also putting in the time and effort.

Do they need to?

They’re probably doing it because they like a challenge and they love the game of football. From the clips I’ve seen, when Salford score it means a lot to them.

They’re making the league stronger by bringing the likes of Danny Lloyd back to it. That only enhances the reputation of the league and raises the profile.

Their FA Cup run a few years ago generated a lot of interest. They are a story now, hence why we at BT Sport are there for the first game of the season against Leyton Orient.

They’ve been very open about how they’ve got there, they’ve invested in a new stadium and seem to be trying to grow the club in the community. So I’m all for it.

It makes it very exciting because there will be other clubs who fancy their chances. Last season Boreham Wood and Sutton United had excellent seasons.

Luke Garrard at Boreham Wood is a great manager but he’s lost his best player in Bruno Andrade and arguably the best keeper in the division in Grant Smith. That’s what happens when you have a good season.

But it’s interesting to see how the two relegated clubs have reacted to dropping down. Chesterfield appointed Martin Allen and Barnet brought in John Still – two managers who have certain styles and know the league.

John has brought in some good players. Craig Robson, Andre Boucaud, Mark Cousins and Callum Reynolds from Aldershot. They’ve still got Dave Tarpey too so they could be very strong and the manager will be key to that. The same with Martin at Chesterfield.

Then you look to Leyton Orient under Justin Edinburgh. The fact they appear to have kept Macauley Bonne is key.

I saw a difference when Justin came in last season – fitter, hungrier, better organised and if they went a goal down they’d react better than they had before.

Outside of those four it’s very open. Never count out Dover! Every year Chris Kinnear puts a squad together to compete despite losing lots of players. Ebbsfleet and AFC Fylde will have learnt a lot and it will be interesting to see Wrexham under Sam Ricketts.

I fear for Aldershot because they’ve lost the likes of Manny Oyeleke, Cheye Alexander, Jim Kellermann, Will Evans and Reynolds. Gary Waddock is a great manager and I’m sure he’s under no illusions but I just don’t know if they will be as strong.