Home / Features / Columnists / Football Matters: We only do positive – A strong message must be sent out!

Football Matters: We only do positive – A strong message must be sent out!

Posted on 4th October 2018 by admin in Columnists, Features, Football Matters with 0 Comments 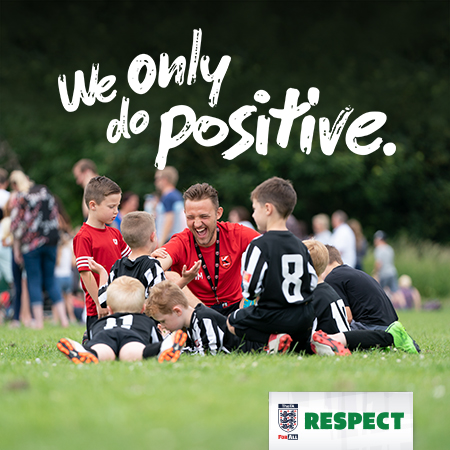 A lot has been said over the years about disrespect in grassroots football – now it’s about changing the tone of voice to focus on the importance of Respect in the game.

Respect is a positive action. Yes, there are heightened incidents which can grab the headlines but there is a lot of good work going on every week across the country.

We need to make it socially unacceptable to behave badly on the touchline, whether it’s coaches or parents.

Having previously been involved with Respect from a County FA’s point of view – I worked for the Suffolk FA – and also as chairman of a youth league for three years, I had my own take on what works well locally.

But I was keen really keen to get an understanding about what ‘good’ looks like across the country and appreciate it’s going to be different in different places.

So my first year was very much that. We did a lot of research to understand what has worked well over the last eight years but also really look forward to see where we need to position Respect strategically in order to make the greatest impact.

Grassroots football covers such a vast area, so the questions were: where do we need to focus our resources time and money? What is most needed?

Over the last few months we’ve really started to execute our three-year strategy for Respect.The key focus is mini soccer and youth football – U7s right up to U16s. With the Respect campaign being nearly ten years old, we’ve naturally got a whole new group of parents, coaches, volunteers and players have emerged.

Ensuring the environment is right for those players, and that it is created by those parents, coaches and volunteers, is really important.

A big point from the research was getting the off pitch right as much as on the pitch. We often talk about the match environment in isolation. Actually a lot of incidents can happen from social media, or from the way the changing rooms were left last time the two teams played, or it could even be the way you are welcomed when you arrive at the ground. That can go a long way to setting the tone for the rest of the day and the game ahead.

So it’s looking at how coaches, parents and volunteers from both teams can work together – rather than against each other – to create that environment because, ultimately, everyone is looking for a fantastic experience.

It links in to our ‘We only do Positive’ campaign. We know 90 per cent children play better with positivity. That stat isn’t necessarily surprising but it’s important people see that encouragement and a positive environment is so important.

If you flip it, we know one negative experience can have a big effect on a child for lasting period of time. It’s adults creating the environment so players will enjoy the game more.

This is not about being positive for positives sake. It’s about focusing on the good things players have done.

In grass-roots football there will always be mixed abilities. Let’s help players love the game. Everyone develops better when they are having fun.

The FA Youth Review was implemented in 2011 and really focused on making the game child friendly with 5v5, 7v7, 9v9 and more appropriate goal sizes. That’s been embraced but now it’s about building on that and topping up all the good work that has been done.

We’re well aware people can drop out of the game from 14+ – so this is about giving them a really good experience so they want to keep playing.

The challenge with Respect is how we bring longevity to it. We don’t just want it to be a one-off campaign. That adds value but we want to make it consistent in the game each week in all areas.

We’ve got Play Your Part code of conducts which helps implement the values whatever your role is. It gives clubs a real focus to help their volunteers but, also, if there is disrespect, how to deal with it.

Each month we have activations which focus on different ways of changing behaviour. So in the winter months we’re looking to pilot Positivi-tea. It’s a simple idea of people holding a cup of tea that is labelled with positive messages. The science behind it is people are less likely to shout something abusive or negative if they’re holding something that’s labelled with good messages.

In January we’re going to be launching 21 Days of Positive – that’s how long it takes to break or form a new habit. We want to empower coaches and parents to engage with their children in the right way.

These levels are naturally very competitive, as all levels are, but there’s a responsibility.

It’s a public place, families and kids are there so, if you look at it from a holistic point of view, a good environment can help boost gates and participation.

There are lots of clubs doing great things and we’re seeing good evidence where managers who focus on good behaviour on and off the pitch are getting good results as well.

Everyone has a role to play in teamwork

When I came into this role, I was already quite aware that referees are almost burdened with Respect being their role and responsibility.

If you’ve got a coach who behaves badly over a number of weeks, it tends to transpire onto the parents and they think that’s how you can act. In turn, that transpires onto the pitch and then the referee has a really difficult job trying to manage everybody – bearing in mind, their job is to manage what’s on the pitch.

So the trigger actually comes from the leader. The positive coach is the one who, in youth football, gives the team-talk in front of the parents and helps them understand what they’re trying to work on with the players.

The parents will then give positive praise so the players have more fun and that normally helps the referee enjoy the game more. Referees can make wrong decisions but not because they mean to, we’re all human.

So rather than silo referees, let’s help them too by the coaches and parents behaving right.