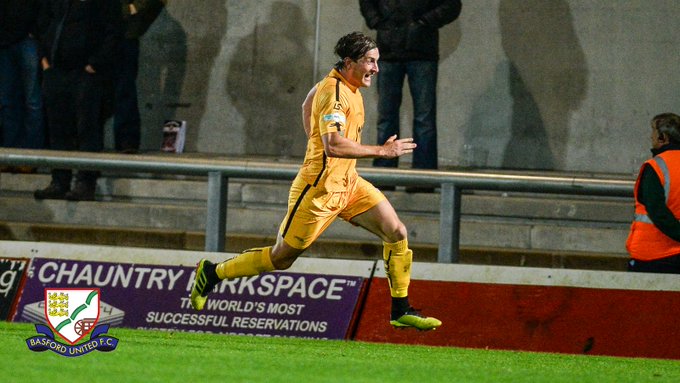 Basford United’s Stefan Galinski will never forget the night he scored a header from his own half after his exploits in the Northern Premier League started going viral around the world this week.

After more than a quarter of a million views within 48 hours of scoring in a 3-1 win at FC United of Manchester on Tuesday night, he’s unlikely to get the chance.

Despairing Rebels keeper Cameron Belford may want to erase memories of his loan spell in the NPL’s Premier Division from Nuneaton after Galinski’s clearing header bounced and looped up over his head and into the net.

Within hours, footage provided by FCUM TV was being shared and viewed by thousands as well as being picked up by the BBC and media outlets from the Belfast Telegraph to Sky’s Soccer AM.

Up and over: Stefan Galinski beats Cameron Belford

“I don’t quite know what happened there,” said FCUM’s stunned commentator as Galinski’s second half goal put Steve Chettle’s side 2-1 up before Courey Grantham added a third in the first minute of added time.

A match report on FC United’s website later described the bizarre goal at Broadhurst Park as “seemingly in slow motion”.

For everyone who wanted proof that it happened, here is Stef Galinski’s headed goal from inside his own half.

Pictured running to celebrate, the 25-year-old was delighted with his remarkable luck In a post match interview for Basford United.

“Hey, sometimes you’ve just got to put your head on it and that’s what I did,” said the defender.

The NPL Premier Division club are lapping up the publicity they’re attracting as views of the goal tick up.

They also have a new nickname and hashtag for Galinski that Manchester United and England defender Harry Maguire famously knew all about with his heading ability at his former club Leicester City.

@Basfordutdfc tweeted: “Stef’s goal really has turned into something of a monster which is now completely out of our control. We are loving it. #SlabHeadStef”