Home / Features / Columnists / The Non-League Paper’s Diary of a Groundhopper!

The Non-League Paper’s Diary of a Groundhopper! 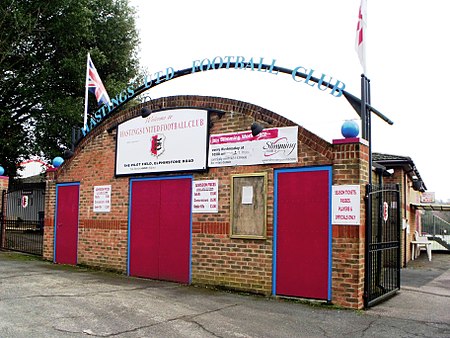 After a quick consultation with The Fox, I decide on a bit of a trek today. Hastings United have been on my radar for many a year for two reasons: every Hopper I meet tells me Pilot Field is a corking stadium and that I must visit. Also, I keep hearing rumours that the Arrows are planning to move grounds. It’s got to be visited and today’s the day!

It would be madness to travel all this way and not see a bit of the local scenery. However, it is blowing a hooley and even standing up on the seafront is a bit of a struggle!

After parking, I notice an old ground next to the current one, complete with derelict terraces and a stand. I presume it is Hastings’ previous stadium. A little further on is the main entrance to Pilot Field complete with impressive club crest and metal gates.  I pay £10 at the turnstile and then £2.50 for the programme. The club shop and tea bar are already open and the clubhouse is doing brisk business. All this despite it being over 80 minutes before the game actually starts!

I instantly fall in love with the stadium. A towering wooden grandstand is situated along one touchline, with another charismatic covered terrace behind one goal. There’s the ghost of an open terrace along the other touchline, now covered with grass. There is cover behind the far goal. The ground is completed by a clubhouse in one corner with a wooden decking out front. All in all, it is a huge area of land and the pitch looks enormous!

The wind is picking up. Several large rubbish bins have been thrown about. Fans stream in but it doesn’t look a bumper attendance. Home fans come equipped with drums but it has to be said their performance is perfunctory at best. Mind you, the result is surely never in doubt right from kick-off with United top of the Isthmian League’s Division One South East and Ramsgate languishing in 19th place. There’s also a difference of 46 goals between the sides!

From the off, the Arrows are in second gear and still look like they could net double figures. They ease into a two-goal lead at half-time before an early second half penalty made it three.

An act of stupidity then sparks a flicker of hope for Ramsgate. Having already been booked, Craig Stone receives a second yellow for throwing the ball away. Of course, according to the crowd and the players, the red card is entirely the fault of the referee and absolutely not due to a player’s act of petulant time-wasting when three goals ahead!

The sending off effectively kills the game, which is disappointing. The attendance is announced as 703. I would have said more like 450, so it shows how massive an area the stadium takes up. It        swallows up an impressive amount of people!

As spectators leave, the tea bar is still open, which is a nice touch. A version of Enjoy Yourself (It’s Later Than You Think) is playing as people disperse in to the night. I certainly will enjoy myself once the 200-mile drive home is complete and I’ve remembered to pay The Dart Charge online. I usually wake up in the small hours two or three days later realising I have yet to pay! Ouch!