Home / Latest News / The Non-League Paper Podcast is back after a winter break!

The Non-League Paper Podcast is back after a winter break!

Posted on 24th January 2020 by admin in Latest News, Vanarama with 0 Comments 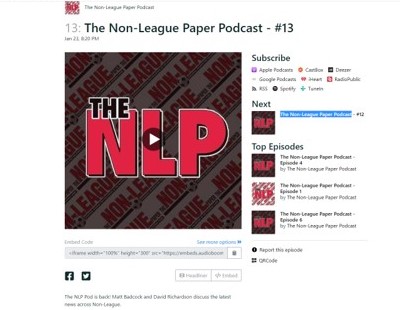 The Non-League Paper Podcast is back after taking a self-imposed winter break to cover the festive fixtures and get 2020 underway!

Hosted by a refreshed NLP editor Matt Badcock and senior writer Dave Richardson, episode 13 was released for download on Thursday after the duo sat down to share their thoughts on this season’s big battles for promotion and survival from the National League down to Step 5.

Launched last summer to entertain Non-League fans between issues of The NLP and available on the podcast platforms of Apple and Google as well on Spotify and Audioboom, the first episode of 2020 also runs the rule over the shocks and drama in the Buildbase FA Vase and FA Trophy as the latter rounds in both competitions get underway in February.

NEW! The Non-League Paper Podcast is back!

Covering Steps 1 to 5, FA Trophy and FA Vase – listen on: