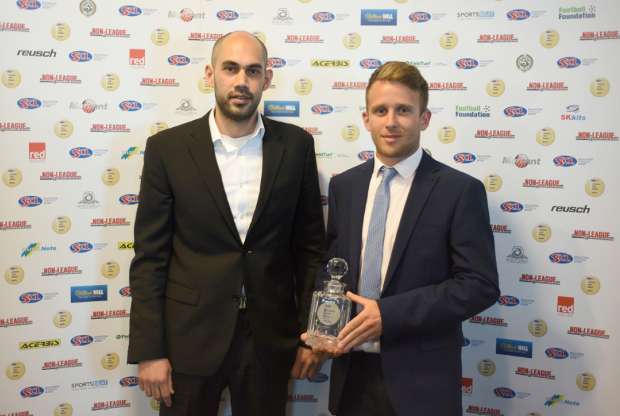 GOSPORT BOROUGH fans, we know what you’re thinking. He’ll get a few for sure, but as keeping up this scoring ratio?

Let’s be realistic for a minute here. Warren Bentley deals in goals. Frankly, they act as currency for the 26-year-old with something special in his boots.

You don’t need to tell Winchester City that, or anyone else down their neck of the woods. How’s this for a record? Season just gone, 57 goals in all competitions. Year before, he scored 56 times. One before that? Just the 58 goals. No big deal. Inside three years, Bentley has been a Rolls Royce. That’s 171 competitive goals since August 2013.

Yes, his form in the Southern League South & West has finally been noticed. He has signed for National League South Gosport, the deal went through as he was sitting down to lunch at the National Game Awards.

He may be playing two leagues higher now, but don’t bet against him leading the scoring charts for a fourth season running.

“I said to myself at the start of the season that I won’t be able to match last year’s total,” he said after collecting the Morrant Golden Boot last Wednesday.

“I knew after we stepped up into Step 4 that it would be a little bit more demanding and that I had to be realistic with things.

“But it’s fair to say I carried on where I left off – I just love scoring goals, it’s such a great feeling and I was pleased I managed to keep putting the chances away.

“We fell just short of promotion but it was the club’s first year back at that level. It was a good season and hopefully both the club and I, with Gosport Borough, can have more success next season.”

After telling himself to measure his own expectations last summer, Bentley had to rip up his little rule book at half-time of the first match of the season.

Why? Within 42 minutes of the opening game of the new campaign the forward had notched five goals. A few days later, City travelled to Wimborne Town.

Bentley, buoyed by hitting the ground running on the opening day, added another four to his tally. That was nine goals in the first two matches. He went on to score 42 in the league – and Alex Pike at Gosport won the race for his signature with Poole Town, the Southern Premier champions, also keen.

“Yeah, I didn’t expect that start!” he smiled. “You don’t expect to walk in at half-time of the first game of the season after preparing for it all summer and to be sitting there having scored five times.

“It just comes naturally and I hope I can keep the goals coming. It’s an exciting time for me getting a move like this. I loved it at Winchester, they’re a fantastic club with great people but I actually think the time is right for me to step up to the National League South and test myself at that level.”

He’s the natural replacement for a player who wasn’t too shabby when faced with just a goalkeeper to beat. Bentley will replace Justin Bennett, who has switched to Salisbury after calling time after nine goal-laden years.

“Obviously they are big boots to fill,” Bentley added. “But I felt I had to take this chance and to play at that level will be a good for me – it will be difficult but hopefully I can carry on at Gosport where I left off at Winchester and prove myself.”

If it wasn’t for his career, maybe the pro game would be seeing what he has to offer.

“I’m a PE teacher, it’s something I have been working hard at for a long, long time so I think this is the best way forward – to keep going in work and play in a strong league,” added the striker, who also grabbed 12 in cup competitions with an FA Cup hat-trick against Petersfield Town and two against Maidenhead United serving notice of his ability to get goals against National League South defences.

“If things go well and one day the right opportunity presents itself you can never say never but at this moment in time I’m just excited about what’s in store.”