Posted on 27th May 2018 by admin in Features, Harrogate Town, National League North & South with 0 Comments

“I could see the ground totally full when the lads were out for the warm-up,” he told The NLP. “I wanted to get my phone out to make sure I could remember it in years to come because it’s been seismic changes from midweek games where we would be lucky to get 150.

“Gradual progress and then the full-time change this year has really launched us, as well as the laying of the 3G pitch which has enabled, not just community usage, but us to play a style of football that’s been good on the eye and successful.”

A crowd of 3,000 packed in to see Town’s triumphant 3-0 victory over Brackley Town that secured a first ever promotion to Non-League’s top-flight. Harrogate fought with Salford for the title, eventually succumbing in the penultimate week of the season as the Ammies clinched it, leaving them in the play-off scrap.

They trailed in the semi-final against ten-man Chorley before snatching the tie in the last minute, and then enjoying a more straightforward ride in the final.

Weaver said: “We scored at the right times which eased the pressure. When the third goes in you think it’s going to be your day but you don’t want to take anything for granted.

“The players were outstanding during the play-offs; they really stood up and showed what they were about.

“There wasn’t really a hangover effect from the disappointment of not winning the title. We couldn’t let it slip because it had been such a good season. We knew we would be tagged as nearly men if we hadn’t gone up, we had to quickly refocus.

“It was second v third in the final so we couldn’t feel hard done by with the way it turned out in the new play-off format.

“We earned the right to have the home advantage, where we had been good all season and enjoy playing.

“It’s a great feeling to have done it but obviously the next stage is a big challenge.” 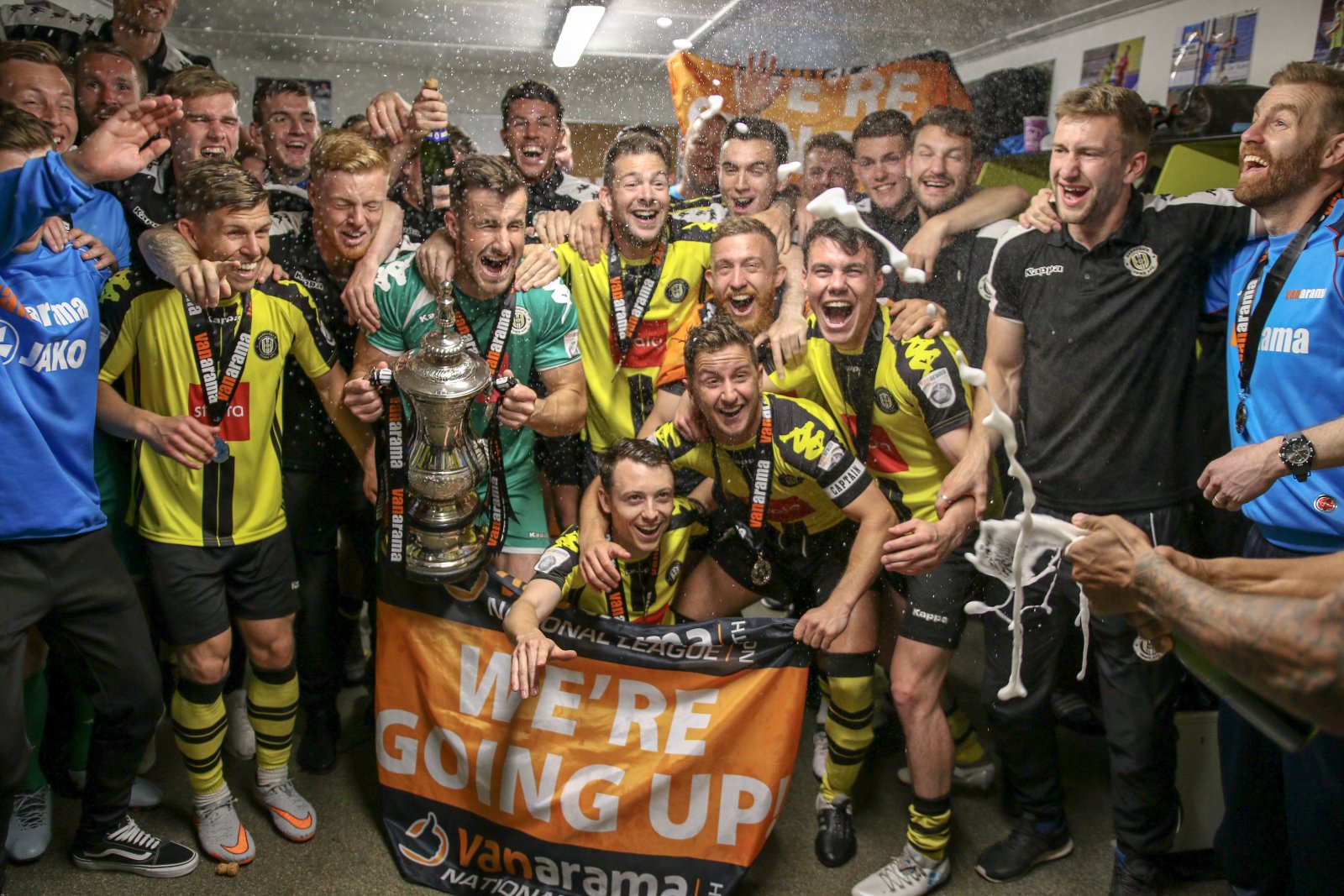 Nine years ago today, Weaver, the former Nuneaton and Lincoln defender, was appointed player-manager of Harrogate.

In his first season they finished bottom of the Conference North but were reprieved due to Northwich Victoria’s financial issues. Welcome to management.

Progress since then has been steady with Weaver’s multi-millionaire dad, Irving, taking over the club in 2011. Success came in the following year’s FA Cup as they reached the second round for the first time in their history, losing to Hastings on penalties.

A fourth-placed finish two years later was a league high as Town bowed out to AFC Fylde in the play-offs with momentum gathering pace on the pitch.

A 3G pitch was installed for the following season and then a move to full-time for this campaign brought promotion.

“There have been big changes but because it’s over a period of time, it’s been block by block to really get the area energised and behind us,” added Weaver. “It’s taken a lot of hard work to do that.

“We like to do things in the right way and I think that’s why the local community have got right behind us because they know the intentions are right.

“It’s been a really busy week since Sunday, sorting players out and discussing futures.

“The spending power of the clubs at the level above is so much more and it’s quite amazing some of the figures so far, but that doens’t mean you join the race with them. We have to prove we can handle it without blowing up everything we’ve done so far.

“I’m going on holiday in a couple of weeks, maybe that’s a time we can enjoy promotion a bit more..

“We had this booked before and I thought ‘well, it won’t be any good if we don’t go up’, but it’ll be great with the kids. I think it’s a well-earned rest but this is an important time.

“There are real life scenarios going on with contracts ending. We’re not ripping the team up, that’s not the plan, it’s just about building on the core that we’ve got.

“It’s exciting, there’s a lot of big clubs at this level, like Wrexham and Chesterfield.

“There’s no reason why we can’t stick to our guns and keep the way we’re playing. In some ways the pressure is off because we’ve gone to a stage where the club has never been to before.

“We’re trying to build a proper legacy where people can go in years to come and a club to be proud of.”